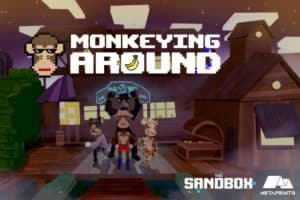 The Sandbox has partnered with the company Metaprints to jointly launch the Monkeying Around metaverse, a new blockchain-based game that will also feature the Bored Ape (BAYC) as protagonists.

What’s Metaprints all about? Helping to bring the Bored Ape into The Sandbox.

Metaprints is a company involved in helping cryptocurrency projects enter the metaverse, thanks in part to the collaboration and investment of Animoca Brands, another well-known brand involved in blockchain gaming.

As mentioned, the new game created by Metaprints will feature Bored Ape. For the time being, however, this is not an official collaboration with the Yuga Labs team (the creators of the collection of the famous BAYCs), but simply will be used NFTs held by the company’s team.

In fact, if a person owns an NFT from the Bored Ape, they have all the rights to use it, including a commercial one.

Anyway, the game will be launched next September 30, and the setting will be a swamp.

The rewards for playing the game

It is a play-to-earn game where users will be able to win prizes of up to $30,000 by completing missions and climbing the leaderboards.

The game will be open for 3 weeks. Additional prizes can be redeemed by those who own NFTs from the Bored Ape or Genesis Metaprint NFT collections. In addition, those who own BAYCs will be able to play using their own avatar in the likeness of their monkey.

Monkeying Around will thus be part of Alpha Season 3, which is a kind of new era for games on the blockchain with NFT integration. Alpha Season 3 could be said to be a video game incubator. There are currently over 90 of them, built by over 22 different companies.

Sebastien Borget, Co-Founder and COO of The Sandbox, said:

“The Sandbox is co-building the open Metaverse together with major brands, builders and a community of creators and players. We’re pleased to work with inspiring Metaverse builders in our ecosystem such as Metaprints and Forj who are bringing creativity, fun and immersion to the experiences and help onboard more brands into Web3 to engage their users & communities.”

Here is the trailer for the Monkeying Around game:

Harry Liu, CEO of Forj and Team Lead of Metaprints, then commented:

“The ‘Monkeying Around’ Experience is a showcase project from the team at Metaprints and Forj, illustrating both the fun and creative experiences that brands can create for their communities in the metaverse,” said Harry Liu, CEO of Forj and Team Lead at Metaprints.”One of our core beliefs is that experiences like these are at the forefront of how brands and communities will use their IP and new mediums to storytell and engage in the future.”

The post The Sandbox launches a new game with Metaprints and Bored Ape appeared first on cryptodailynews24.com.