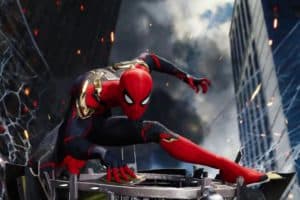 The NFTs of the Amazing Spider-Man comic book covers

VeVe has been issuing NFTs of famous comic book covers for some time now, and today it is releasing new limited editions of covers in blind box format with five levels of rarity.

One of them is a variant of the cover of Amazing Spider-Man #1 by Skottie Young.

.@skottieyoung has been writing & drawing for @Marvel for over 20 years. He’s behind the Young Variants seen on VeVe!

This 1/1 variant cover artwork for Amazing Spider-Man #1 is available now via silent auction only on the VeVe web app: https://t.co/ajxEIpZEMt#MARVELxVeVe pic.twitter.com/WeJOnWnORc

Marvel’s other projects in the NFT field

Marvel Entertainment has been releasing NFTs with Veve Digital Collectibles for some time now, thanks to its Marvel Artworks collection. In fact, other Spider-Man and Captain America digital collectibles had already been launched in 2021, and Veve also collaborates with other similar companies, including DC Comics and Disney.

In fact, back in April 2021, Marvel had already begun exploring the NFT market with art galleries heralding auction sales of blockchain works.

DC Comics had also launched its own Non-Fungible Token collections as early as 2021, starting with free mints with NFTs depicting all the superheroes invented by DC Comics such as Batman, Superman, Green Lantern, Wonder Woman, and Harley Quinn.

Sales in the NFT sector

However, it must be said that the NFT market has now been in sharp decline for the past few months.

Taking the sales data of the industry’s main marketplace, OpenSea, as an example, it can be seen that from $2.5 billion in May it has gone down to $0.6 billion in July, while in the current month $0.5 billion has not even been surpassed yet.

Since June there has been a real collapse, following probably the bursting of a real speculative bubble. Suffice it to say that in July last year it barely exceeded $0.3 billion, while the following month it soared above $3.4 billion. The peak was in January when it even exceeded $4.8 billion.

The bubble inflated in August 2021 and remained active until May 2022. With the crashes of the cryptocurrency markets in May and June, the bubble deflated, coinciding with the sharp decline in cryptocurrencies.

Analyzing the volume of searches on Google Trends shows that the peak occurred just in January, while the current level is by far the lowest in the past 12 months.

Records in the NFT world

Despite that, big companies’ NFT projects continue to make interesting numbers, such as Nike, which reported generating $185 million in extra profit from Non-Fungible Tokens. Or to the Bored Ape collection that set their sales record coming in at $2.4 billion in total sales, or more accurately 657.2 thousand Ethereum (ETH).