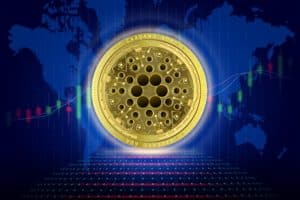 Recently IOHK (Input Output Hong Kong), the company behind the development of the Cardano network, disclosed what the conditions are for the upgrade to proceed.

Cardano’s next hard fork, Vasil, is about to arrive

SPOs/nodes: SPOs running node 1.35.3 (the #Vasil release candidate) now account for 40% plus of mainnet block production in the current epoch.

Currently, nodes running version 1.35.3 account for 42% of the block production on the mainnet in the current epoch, so it will still take a while before 75% can be reached.

However, already 57% of nodes overall are using the new version.

Regarding exchanges, they state that there will be news from this point of view in the coming days and that Binance is in the process of switching to the new version.

On the other hand, regarding dApps, they state that there are 4 that are testing the new version of the node.

IOHK has not made any predictions about either when all of these conditions might be met or when the hard fork might take place, but from their statements, there seems to be optimism about this.

In another tweet, they call Vasil “the most significant update for Cardano ever” and reveal that they have published a web page on Zendesk to track progress.

The #Vasil upgrade is the most significant for #Cardano ever. And the entire technical community is working hard to deliver it.

Want to keep track of progress? There's a now a page for that.

We'll keep it updated regularly as we get ever closer

The path to this upgrade is divided into four phases, namely devnet, preview, pre-production phase, and finally release on the mainnet.

Currently, devnet and preview are already available, while in pre-production they are still using the Alonzo version.

Vasil is also the most ambitious upgrade program to date on Cardano because it is a complex upgrade with multiple parts involved. For this reason, the roadmap is being carried out cautiously, without speeding it up too much.

In fact, the original May 19 roadmap called for the hard fork to occur on June 29, but it has been continuously delayed since then.

Note that over the past three months, the price of ADA, Cardano’s cryptocurrency, has dropped from about $0.60 to $0.44, perhaps due in part to the continuous postponements of this major update.

The post Cardano: a major hard fork is coming appeared first on cryptodailynews24.com.