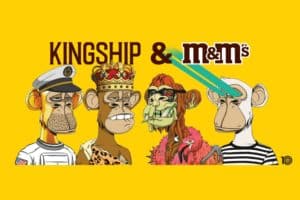 Yesterday, the company that produces the world-famous chocolate candy, M&M’s, announced the launch of a limited edition dedicated to Bored Ape Yacht Club.

These are three limited-edition M&M’s products, such as exclusive packets with all the classic six colors of the candies, plus some customized with the image print of Bored Ape Yacht Club’s KINGSHIP group members, namely Captain, KING, Arnell, and Hud.

The Bored Ape edition of the famous M&M’s candies

Three hours after the announcement, the company warned that one of the exclusive packages was already sold out.

SOLD OUT. That was fast

In fact, in total, the company plans to sell only 10,000 exclusive packages of this collection, in gift boxes and jars.

KINGSHIP is the first Bored Apes supergroup to have partnered with a big-name brand. It is a group of 5,000 Key Card NFTs focused on inclusivity and paying homage to rock ‘n’ roll legends.

M&M’s is a brand of the Mars Group, which struck a deal with Universal Music Group’s 22:22 label to be licensed to use a collector’s Bored Ape NFT images.

According to Mars Global Vice President Jane Hwang, the company knows it needs to be more innovative than ever with a brand as famous as M&M’s, which is probably why they are exploring new ways of doing marketing and communication.

Yuga Labs’ Bored Ape Yacht Club, on the other hand, is by far one of the most popular NFT projects, so much so that it has generated nearly $2.4 billion in secondary market trading volume to date.

NFTs as an excellent marketing resource

The use of NFTs in mass corporate communications can open the door to a new way of satisfying especially avid fans and collectors. Indeed, it allows, not only for the creation of certified limited edition products but more importantly, for their easy exchange on the secondary market if they are digital products.

In addition, it makes perfect sense that the most successful NFT collections, i.e., with a very well-known brand, can interact with other brands to help increase their notoriety, especially with younger audiences.

The potential of the NFT market from this point of view is considerable, due in part to the fact that the NFTs themselves are certified and publicly verifiable, non-duplicable, non-falsifiable, non-modifiable, and of certain and unique ownership. The success of this initiative by Mars and M&M’s could pave the way for a new way of leveraging the most successful NFT collections to do co-branding.