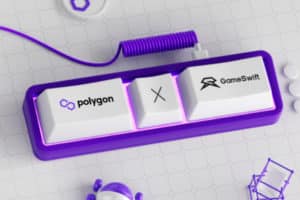 Polygon, Ethereum’s scaling platform, announced that it has added GameSwift, the new version of StarTerra previously developed on Terra’s blockchain, to its applications on the Polygon Supernets for Web3.

Here is the roundup of tweets dedicated to the announcement:

1/ @GameSwift_io is changing the gaming ecosystem

A classic use case of #PolygonSupernet powered by @0xPolygonEdge, GameSwift is building a 360-degree platform for game devs & gaming studios to provide tools to launch a Web2 game into the #Web3 world.https://t.co/RtL9UE4Y16

is changing the gaming ecosystem

A classic use case of #PolygonSupernet powered by

, GameSwift is building a 360-degree platform for game devs & gaming studios to provide tools to launch a Web2 game into the #Web3 world.

A large community of Web2 gamers wants to join Web3. #Polygon has built an ecosystem for them that is open, accessible, sustainable & secure.

is thrilled to partner with GameSwift, a one-stop gaming ecosystem with interoperable tools designed for Web3 games.

This partnership will further boost the recent influx of Web2 games transitioning to the #Web3 world.

And indeed, GameSwift is a GameFi ecosystem that offers a wide range of games and the ability for users to participate in Initial Game Offerings (IGOs) and Initial NFT Offerings (INOs).

Not only that, but developers can also actively participate, bringing their projects into the decentralized space and their tools to scale and customize them, now using Polygon Supernets.

The new decentralized GameFi ecosystem also has a unique set of features that makes it easy for players to access the Web3 seamlessly so that even for blockchain newbies, the experience can be simple.

There will also be a dedicated GameSwift browser extension, which will enable a range of cross-platform possibilities. For developers, there will be the GameSwift Bridge, the cross-communication bridge that connects the Ethereum Virtual Machine and Substrate chains and will allow holders to seamlessly transfer funds and other digital assets between the networks.

Another unique feature is the ability for Web3 developers to access GameSwift’s full analytics service on Polygon Supernets, so they can dig deeper into a project’s data to build new strategies that foster growth.

Polygon expands its ecosystem regarding the GameFi area

Polygon is increasingly playing a leading role in new projects. In fact, in addition to GameSwift, Ethereum’s scaling blockchain has also recently been chosen by Coca-Cola, Mercedes Benz, and Disney.

In early August, global beverage giant Coca-Cola issued and gifted new NFTs on Polygon to celebrate the anniversary of International Friendship Day, as well as its first anniversary in the Web3 world.

Mercedes Benz chose Polygon to launch its data sharing platform called Acentrik. It is a pilot project started two years ago that uses Polygon for its most advanced and decentralized version.

And then Disney, which in its 2022 acceleration program has seen fit to also include Polygon’s blockchain again for the development of the Web3 ecosystem.