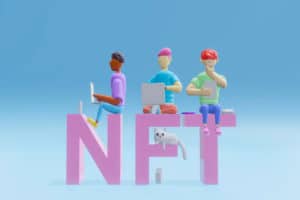 NFT projects: from Power Rangers and superheroes to TV series

It was October 2021, when Hasbro’s American multinational launched a series of 1/1 avatar-style NFTs with unique Power Rangers attributes, developed on the WAX blockchain.

The large toy and entertainment company had partnered with the Worldwide Asset eXchange (WAX) to release its first collection of NFTs, available for a limited time.

AIYIYIYIYI, the first-ever #Hasbro #PowerRangers #NFT is now available for a limited time on @HasbroPulse, part of the #WAX #blockchain. But wait, there’s more? Yep. You can redeem for a Special Edition Megazord, part of the new Zord Ascension Project. #hasbropulsecon (1/3) pic.twitter.com/QHpr6mIWri

“AIYIYIYIYI, the first-ever #Hasbro #PowerRangers #NFT is now available for a limited time on @HasbroPulse, part of the #WAX #blockchain. But wait, there’s more? Yep. You can redeem for a Special Edition Megazord, part of the new Zord Ascension Project. #hasbropulsecon (1/3)”.

Not only that, by purchasing the package on Hasbro, the user would get a unique NFT token and 1 digital Power Coin redeemable for 1 Dino Megazord Special Edition with 10 accessories.

Superhero NFT Wars: NFT collection as a pass to the Metaverse

Another gimmick is the Superhero NFT Wars NFT Collection launched in May 2022, which allows owners to be able to access the SocialFi metaverse and interact with all NFT ecosystems.

Specifically, two sets of the NFT collection of the SocialFi Superhero NFT Wars metaverse platform were launched: 1) SNW-CB (Cardborg – The walking evolutionary robots dressed in a suit of wooden boxes) and 2) SNW-X (TV Head X – The scarce cyborgs that walk as tribute to famous celebrities, movie characters or anime icons).

The Superhero NFT Wars platform was developed by former members of Google, Binance, Tencent, and Ubisoft, with the goal of having an interactive metaverse where all NFT owners can show off their robotic suits, play and participate in Play-to-Earn, earn points, etc..

At the moment, the NFT project has shared the latest news regarding the platform’s functionality:

Just in case you missed the #metaverse #AMA with @DoubleProtocol , we have it all recorded for ya'll

New features of the #SNW #metaverse coming shortly. Look forward to hang out with you together

“Just in case you missed the #metaverse #AMA with @DoubleProtocol,we have it all recorded for ya’ll. New features of the #SNW #metaverse coming shortly. Look forward to hang out with you together”.

One NFT project involving DC superheroes and supervillains as NFT hybrid trading cards is the one made by Warner Bros and Cartamundi.

In order to purchase them, users had to use the Hro app, a platform that combines physical and digital worlds, unlocking the DC multiverse to collect, trade, and purchase NFT hybrid trading cards.

Specifically, on each DC card in Hro will be a QR code that links the physical card to its “digital twin” on the Hro app. By accessing that marketplace, acquirers can then buy, sell, or trade other NFTs in the collection with each other.

The blockchain used in this project is Immutable X, a carbon-neutral Layer2 blockchain based on Ethereum.

Netflix and the low appreciation of Stranger Things NFTs

Moving on to TV series, there’s Netflix’s NFT project and the “Stranger Things” minigame, made with Candy Digital.

Basically, Stranger Things has players solving puzzles to earn NFTs of the show’s stars. The NFTs in the minigame are 11,111 developed on Candy Digital’s Palm blockchain (an Ethereum layer 2 sidechain) and indicate ownership of one of the five digital posters.

Unfortunately, the Stranger Things game has not been well received by fans, with complaints posted on Twitter regarding technical problems, as well as criticism towards Netflix for getting into the Non-Fungible Token business.

The post NFT projects: from Power Rangers and superheroes to TV series appeared first on cryptodailynews24.com.