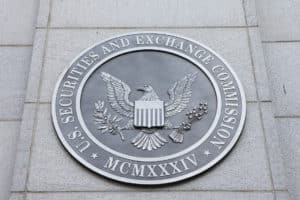 Forged document from the SEC against Tether

In recent days, a forged document was circulated online according to which the SEC accused Tether of selling securities, resulting in a sanction.

However, it was instead a fabricated fake, as revealed on Twitter by the anonymous db profile.

It is an edited copy of the BlockFi release, see the release number pic.twitter.com/WqtyWhPhqt

The authors of the fake document downloaded an official SEC document dating back to February, and directed against BlockFi, and changed some of its words to make it look like an August document against iFinex, i.e., the parent company of the group to which Tether also belongs.

In February, the SEC had fined BlockFi for offering unregistered securities for sale. The matter had then been relatively easily and quickly resolved only by the payment of a hefty $100 million fine, and of course the delisting of securities from products offered by BlockFi.

The goal of the fake document was probably precisely to scare the markets by fearing a forced withdrawal of USDT from the market, yet USDT is a completely different asset from that offered by BlockFi which was blocked by the SEC in February.

Nevertheless, someone took the bait on the hoax, so much so that the value of USDT in the market has dropped slightly in the last 24 hours. A few hours after this small drop, the price of Bitcoin also fell.

Tether’s CTO, Paolo Ardoino, later accused one of the people who spread the fake news on Twitter of doing so for personal interests.

As always @cryptowhale is a clown. Wonder who's paying him. Cui prodest?
Who takes benefit from this fake news?
Not even good with forging. Hoping that his funders will ask for refund. https://t.co/Kb0v5rD4Lz

Indeed, he claims that there are people who are paid to spread fake news about Tether, not least because this has been going on for several years.

In this specific case then, it is very easy to see that it is a fake news because it is more than evident that the document spread is a forged copy of a legitimate document from February.

The hypothesis is that $50,000 was paid to spread this fake news, and at this point, a question arises: who makes so much money from spreading this news that they can afford to spend this kind of money to spread it?

The question is, of course, WHO paid the $50,000 to CryptoWhale to post this forged document?

And then why is a known scammer still verified and able to post forged documents on this platform?

Like, exactly how much does it cost to keep that blue seal of approval? https://t.co/JjnN95ljmb

Furthermore, yesterday Tether had announced its compliance with the top five accounting firms in the world, and that upcoming audits will be performed and published by BDO Italia.

Nonetheless, it is difficult to imagine that this will stop the spread of fake news.

In the meantime, USDT has recovered all that it had lost in the past few hours, even though it was a very small amount, and has returned to the classic value of $1.

The post Forged document from the SEC against Tether appeared first on cryptodailynews24.com.