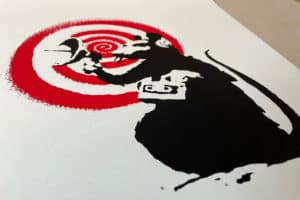 The name of the project is unambiguous, the protagonists of this collection of non-fungible tokens will be real works of art by the famous artist.

At the center of this project are 1,000 original prints from the Banksy Wallet Off Hotel in Bethlehem.

For those who do not know, the Hotel in question is a boutique hotel designed by street artist Banksy in collaboration with other creatives.

The hotel is located near the controversial West Bank, the wall that has divided Israel from the Palestinian territories since 2002.

The original prints were hand-painted by Banksy’s team and were sold to clients of the Banksy Walled Off Hotel in Bethlehem between 2017 and 2019.

Curators and experts estimate the total number of small frames to be around 6,000 pieces.

Behind this ambitious project is LCD Lab, which is trying to create a strong connection between the traditional art world and the NFT world.

LCD Lab was founded by French artist Léo Caillard, a brilliant creative known for both his sculptural skills and his non-fungible tokens.

LCD Lab designed 1000 Banksy-inspired Radar Rats by matching them with 1000 of the well-known box sets.

Each rat (the main subject of the NFTs) has different traits, traits that determine the level of rarity of the digital works but, at the same time, do not affect the canvas paired with it.

To recap, each Non Fungible Token will be collateralized with one of the Banksy Box Sets. The user will not be able to choose which box set to receive, it will in fact be randomly selected.

To ensure full transparency and authenticity of the works, the 1,000 pieces will be authenticated by an art expert and will be sent to the user along with the original hotel invoice that serves as a certificate

To date, the value of a single Banksy Box Set is between

How does the purchase work exactly

Any interested user can purchase LCD Lab‘s NFT on Magic Eden Launch Pad or on the secondary market.

Then they can choose to:

At this time, the 1000 Banksy Box Set is stored in a secure vault and NFTs can be burned at any time.

It goes without saying that the more NFTs that are burned, the lower the supply will be.

The project will be launched in grand style; indeed, on 14 September there will be a Launch Party, a grand artistic opening associated with the VIP livemint in downtown Paris.

The inauguration will involve 25 artists thanks to the sponsorship of the Strouk Gallery and Magic Eden.