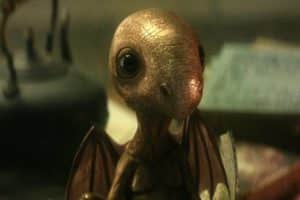 The Sandman: meet the Italian NFT artist who drew Goldie and more

Italian artist Andrea Chiampo, also the author of a successful NFT series sold on SuperRare, is the author of several characters and settings in the new Netflix TV series called The Sandman.

Goldie is definitely the cutest creature I’ve designed so far

In particular, Chiampo created the 3D and design of the small dragon that appears in the first episodes of The Sandman, Goldie, as well as the castle of the Dreaming realm, the dog Martin Tenbones, and many other settings and characters of the TV series.

Great to see my Dream Palace design made it to The Sandman show! pic.twitter.com/VUjcUoMKOU

The background of the artist behind the design of The Sandman

Chiampo worked for over two years for Disney and spent a long time working on the design of the Netflix series.

“In this series, you see at least five designs made by me in each episode”.

Even when Desiderio appears, in episode 7 called “A Doll’s House” – the heart-shaped setting in which Desiderio lives was made by Chiampo.

The Sandman is actually based on a comic book created by Neil Gaiman and was drawn by Sam Kieth in 1989, from which Chiampo took inspiration for the Netflix series.

Andrea Chiampo in the NFT industry

In addition to having worked with Disney, Netflix, 20th Century Fox, Amblin Entertainment, MPC, TheMill and many others, Chiampo is also an NFT artist.

The Italian artist took his first steps into the world of Non-Fungible Tokens in April 2021, dropping the work Genesis on SuperRare, which was later sold for 5 Ethereum in September of the same year.

The collection dropped on SuperRare is titled “Futured Past” and includes illustrations full of symbolism.

Although the works appear to be made using lithography, in reality they are using 3D rendering and digital sculpting created with programs such as ZBrush with which Andrea creates dreamlike creatures and worlds.

Chiampo has also shown his NFTs in several art exhibitions dedicated to the sector, such as at DART in Milan, the Metaforum event in Lugano, and the exhibition organized by collector Poseidon DAO entitled “The Future is Unwritten” curated by Ivan Quaroni and Linda Tommasi.

The post The Sandman: meet the Italian NFT artist who drew Goldie and more appeared first on cryptodailynews24.com.