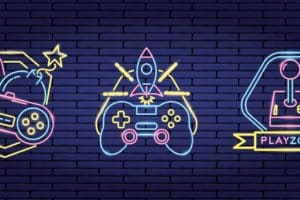 Blockchain is at the service of gaming

Among the many uses in which blockchain has gained prominence over the past decade, one of the most interesting and fastest-growing is certainly that related to the gaming industry.

This has especially been the case since the explosion of NFTs and decentralized finance (DeFi), which have provided a means to earn money by playing one’s favorite video game.

The gaming market in the world, how it has changed after the advent of blockchain

In terms of revenue, the gaming industry is larger worldwide than the film and television industries combined.

The total number of gamers would surpass the fateful 3 billion mark last year. The Asia-Pacific market leads the way, mainly because of the great popularity of mobile gaming.

It is enough to see the exponential success achieved in just a few months by one of the most popular blockchain games currently on the market, Axie Infinity, the game developed by Vietnamese company Mavis in 2017, which now has millions of fans worldwide.

It is an NFT-based online game that is centered on the breeding and battle between online players, who earn native tokens by performing certain in-game actions.

According to the latest available data, the blockchain gaming market was already worth $3 billion in 2021.

It is projected to grow to $39.5 billion by 2025. More than 1.6 million gamers around the world try their hand at some blockchain game, such as the very popular Axie Infinity.

According to a report by DappRadar, as of January 2022 there were 398 active blockchain games, up 92% from the previous year.

Also according to the report’s data, the number of wallets conducting transactions for game-related products has increased to 1.4 million. The report also mentions that venture capitalists invested $4 billion in blockchain-based games in 2021, up from $80 million a year earlier.

In short, a real boom that slowed down slightly in early 2022 due to the big slump in the crypto market.

The main difference between regular and blockchain games is that while the former are controlled by a third-party authority, the latter are, by contrast, decentralized.

Thanks to NFTs and crypto, the concept of play-to-earn was born, which precisely allows the player to earn tokens or credits just by playing or performing actions with other players.

The big news about play-to-earn games

With the advent of blockchain games, players can monetize their time, skill and effort spent playing games. This is a real revolution from the concept of a video game that presumes that somehow the player pays to download or even just to play.

And they gain full ownership of these resources. These resources have value beyond the scope of the games, and players can make money for their gaming skills. Some players have already made these games a substantial source of income.

And that is why video game giants are jumping into this important niche, like for example Ubisoft, which launched its NFT gaming platform, Ubisoft Quartz, in December.

Microsoft acquired Activision in a $68 billion deal specifically to launch into the promising world of NFT and metaverse games.

In late 2021 the company had said it was ready to implement blockchain on its Xbox game console.

According to recent research, about 61.4% of major gaming developers think blockchain will be the real revolution for future games, and most of them say they have already studied implementing it on their video games.

The post Blockchain is at the service of gaming appeared first on cryptodailynews24.com.