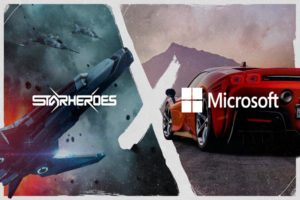 Microsoft has decided to invest in blockchain gaming and to do so it has subsidized Share Heroes, a shooter game set in space.

Playing in third-person, the user fights both alone and in multiplayer mode, either in order to climb the online leaderboard with players from around the world or in as a single adventure.

Thanks to the investment by the company founded by Bill Gates, the video game will now join the Azure PlayFab multiplayer game server, along with successful games such as Forza Horizon, Sea of Thieves and Tom Clancy’s Rainbow Six Siege. In addition, the video game development team will be able to join Ubisoft.

Ubisoft already decided in 2021 to enter the market for non-fungible tokens, in particular based on the Tezos blockchain, by including them in some of its video games as options for interested parties. A few months later, however, Ubisoft had stated that NFTs are not too well understood by players, who in fact have not shown too much interest in this feature.

The StarHeroes development team has been working on the game for over two years and includes several former CD Projekt Red employees who worked on games such as The Witcher 3: Wild Hunt and Cyberpunk 2077.

Play to Earn is of interest to Microsoft

SharHeroes is based on the very popular Web3 “Play and Earn” concept, meaning that players can earn cryptocurrencies. This is one of the booming sectors of the NFT and blockchain industry. According to a Q2 2022 report published by Nonfungible.com, gaming is one of the fastest growing categories for the NFT world.

The news of Microsoft’s investment comes after a few weeks that Bill Gates had declared that for him crypto and NFTs are silly.

Specifically, in an interview with Yahoo Market, Bill Gates in mid-July 2022 had explained that in his view cryptocurrencies and non-fungible tokens are based on the so-called most foolish theory, which is the one that holds that the price of an asset goes up only if the person who owns it is able to sell it back to someone more foolish than him, regardless of whether the asset is overvalued or not. When no one sillier can be found to sell it back to, the price falls.

Based on this idea of Microsoft’s founder, there was certainly no expectation that his company would be interested in the industry.

However, in reality, Microsoft has been sponsoring blockchain development hackathons for years (see 2019 news story), but even more recently the company had funded the Palm startup that focuses precisely on NFTs. The company has also entered the metaverse sector with Microsoft Teams, where users will have the opportunity to have personalized digital avatars and immersive spaces to meet each other precisely in the metaverse.

The post Microsoft invests in blockchain gaming with StarHeroes appeared first on cryptodailynews24.com.