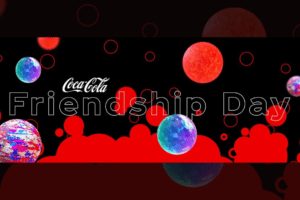 Coca Cola has gifted new NFTs issued on Polygon’s Blockchain to existing holders of its previous Non-Fungible Tokens, in honor of the anniversary of International Friendship Day.

Global beverage giant Coca Cola, which entered the NFT world in July 2021, has issued and given away new NFTs on Polygon to celebrate the anniversary of International Friendship Day.

The collectibles have a unique share-to-reveal functionality where each artwork will reveal after being shared with a friend.

The collectibles have a unique share-to-reveal functionality where each artwork will reveal after being shared with a friend.

In the spirit of friendship, these collectibles, made by @maketafi, were airdropped last Friday to current holders of previous Coca-Cola® collections”.

These are generative and sharable NFTs: they are artworks of bottle designs in the format of Non-Fungible Tokens that are only revealed once they are shared with a friend.

According to reports, it appears that Coca-Cola celebrated its first year in the metaverse by gifting its existing fans new generative NFTs.

This is a new NFT collectible, with a design inspired by the bubbles inside a Coca-Cola bottle and the themes of connection and unity, which was distributed to the digital wallets of Coca-Cola collectibles owners on 30 July.

Basically, recipients had the opportunity to share a second International Friendship Day collectible with a friend to build the brand’s fan community on the open blockchain.

In this regard, Pratik Thakar, Head of Global Creative Strategy at Coca-Cola said:

“International Friendship Day—which launched our metaverse journey in 2021—is the perfect milestone opportunity to thank and celebrate the people who have joined us. We hope to strengthen and expand our ‘Real Magic’ community by building connections through a variety of physical and virtual Coca-Cola experiences”.

And indeed, the American multinational entered the crypto NFT business last year by auctioning off its first NFTs for four days on OpenSea, and donating the proceeds to Special Olympics International, a friend and partner of Coca Cola for more than 50 years.