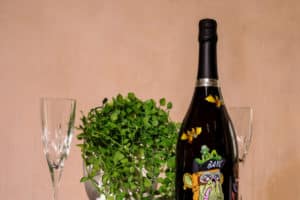 A bottle of champagne from the Avenue Foch company was sold for $2.5 million as an NFT, setting the record for the world’s most expensive bottle.

The bottle, or rather the NFT attached to the ownership of the bottle itself, was purchased by Italian entrepreneurial brothers Giovanni and Piero Buono, who participated in an auction to win the champagne.

Specifically, it is a 2017 magnum of Premier Cru made from Pinot Noir, Meunier and Chardonnay and produced at the Allouchery-Deguerne estate, but what makes them special is the fact that each bottle comes with the NFT of a Bored Apes Mutant of which the brothers will have the intellectual property.

The idea for the project comes from Shammi Shinh, a British entrepreneur and luxury champagne expert who put the bottle on the OpenSea platform for 2,500 ETH.

“Being sold as NFT, I expect some trading in the market before the bottle lands to its ultimate owner. NFTs are the new diamonds and I hope for more awareness among people”.

This is their statement:

“We don’t plan to drink it, instead we think it will be a good investment. There is a lot of turbulence in the financial world, things are changing geopolitically very quickly. Wealthy people will be looking for a place to store their wealth for a while, and why not, a champagne could be one of those places”.

The label of the bottle also has other designs from the Sneaky Vampire Syndicate collection and is studded with Swarovski diamonds.

The magnum was paid for not in crypto but in dollars, in a private sale. Or at least that was the “justification” for the NFT being burned on OpenSea.

Wine goes on the blockchain

This is not the first time that companies have come up with projects to tie the wine industry to that of blockchain and NFTs.

For example, a few months ago the “Battilana 1850 token” initiative was publicized, the name of the NFT that was given as a gift to customers who purchased a 6-bottle box of Battilana Timorasso d.o.c. 2020 on the online shop. The Non-Fungible Token, available in 333 copies, guarantees its owner numerous exclusive benefits.

In collaboration with OVER, the wine has also arrived in the metaverse. The project was implemented by Wine Bottle Club to improve the distribution of fine wine, creating a lasting global ecosystem. Their services are of different types, such as NFTs, bottle tasting and VIP club memberships, but also immersive experiences in the metaverse.