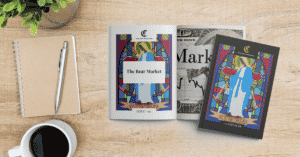 The NFT Magazine, a project created by cryptodailynews24.com and ArtRights, is now in its ninth edition.

The magazine will have its public sale on OpenSea starting 2 August, at a cost of 0.05 ETH with the cover featuring an artwork by African artist Osinachi, now ranked third with highest sales on SuperRare.

The private sale will take place on thenftmag.io, the project’s official website, from 28 July 2022.

It is worth noting that almost all previous issues of The NFT Magazine have sold out and have totalled more than 100 ETH.

Osinachi on the tenth issue of The NFT Magazine

The topic of this tenth issue is the bear market, which for some is perhaps now coming to an end. Each issue of The NFT Magazine is devoted to a different topic each month, covering the world of cryptocurrencies and blockchain, as well as crypto art, of course.

The benefits for owners

Those who own one or more copies of The NFT Magazine also receive some other benefits in addition to reading the magazine.

One of these is the NFTM token, which is used to be able to purchase, in the Gallery section of the project’s official website, artworks by emerging artists selected by the team.

In addition, those who are in the Discord channel or subscribed to the mailing list can access whitelists for various projects with which the team creates collaborations, events, and more.

The Readers Club was created as an aggregator for The NFT Magazine holders to exchange views and also suggest topics and artists to be included in future editions.