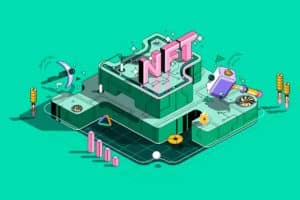 During the second quarter of 2022 (i.e., the period between April and June), according to the latest report published by the data analytics site NonFungible.com, NFT sales dropped 24% from the previous quarter.

In the report, it must be taken into account that the blockchains considered in the report are those of Ethereum, Flow and Ronin.

In any case, NonFungible.com highlights the differences and the decline that took place in the NFT sector between the first and second quarters, and from this, we can see that active wallets also decreased by 33% over the course of three months.

Many also decided to sell, albeit at a loss, and this figure stands at 23% in terms of losses on total purchases.

The only positive figures are in increase in smart contracts (+30%) and average NFT hold period (55%), a figure that could certainly be dictated by the fact that many preferred to hold their Non-Fungible Tokens rather than sell them at a loss.

NFT market: sales are decreasing in terms of volumes, but interest remains stable

Also interesting is the analysis done by the NonFungible.com team in terms of interest in the sector, which remains high, according to Google search data. Interest seems to have dropped since January 2022, but is back to the values of September 2021, believed to be the “golden age” of NFTs.

The countries where this interest remains high are mainly Hong Kong, Singapore, China, Taiwan, the Philippines and Nigeria, while Italy is not even among the top 20 countries in the world. Among European countries we find only the Netherlands and Switzerland, ranked 17th and 18th respectively, and Romania in 20th.

Leading the way in the second quarter of 2022 are collectibles, with more than 300,000 active wallets, followed by gaming and utilities. Art is only in fourth place with 88,000 wallets instead, while metaverse is last on the list with 65,000 active addresses.

Among the projects driving the sector are mainly OtherSide, or the collection related to the Bored Apes metaverse, the Bored Apes themselves, followed then by MoonBirds, Loot, CloneX, and only in sixth place by CryptoPunks.

Highlights for the second quarter of 2022

Through a timeline, the report also highlights key episodes that characterized the period.

In April, for example, we recall that the announcement of Starbucks and Line’s NFT market-related initiatives took place, as well as the record-breaking sale of a CryptoPunk for 1050 ETH. Also in the same month, the Beta version of Coinbase’s Non-Fungible Token marketplace was launched.

Then in May came the collaboration between Madonna and Beeple and Sorare’s entry into the world of baseball.

The last week in the NFT marketplace

Over the last week, the NFT marketplace sales on Ethereum fell by 8% (about $159 million in total) compared to the previous period, although collections such as Electricsheep, Moonbirds, and Moonbirds Oddities had spikes of between 90% and 16,000% in terms of increased trades.