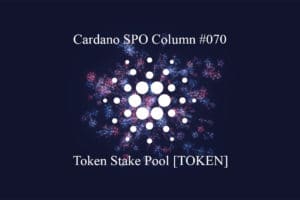 This week’s guest on the Cardano SPO Column is a stake pool operated by someone who has been in the crypto space since 2011 and prefers to stay anonymous: Token Stake Pool [TOKEN].

Last week’s guest was a stake pool operated by a team who has been involved in the Cardano ecosystem since 2017.

Hi Patryk, thank you for having me. I was born in Mexico, and from a very early age, spent most of my time in swimming pools. After years of practice, I won national events and represented my country in international swim meets and trained for the Olympics with the head coach of the US national team.

Before achieving my goal, I realized studying was more important, so instead, I focused on graduating high school with honors, where I was selected to take the Cambridge Advanced English examinations and interviews.

Then, I enrolled in an IT college degree, but soon decided to switch to Electronics Engineering to work with low-level microcontroller programming, embedded Linux and to design microprocessors in FPGAs using hardware description language (VHDL). Later on, I completed a MSc. in Computer Science at a top AI/ML research center.

What’s the path that led you to Cardano and to become a Stake Pool Operator (SPO)?

As an electronics student, I required very specific components, most of which were not available in Mexico. So, I started importing ICs and development boards, selling them to fellow students and faculty members. My interest in electronics would lead me to read about Bitcoin in Slashdot, right before it reached parity with the US dollar in early 2011.

Mexico’s first regulated exchange wasn’t established until 2014, so before that, Bitcoin was usually purchased via intermediaries or international wire to Mt. Gox, Bitstamp or BTC-e. Fortunately, in 2012, Localbitcoins.com provided a peer-to-peer platform where I was able to purchase my first Bitcoin for 80 USD (1595 MXN) via bank deposit and then continued to trade P2P. Soon after, I started mining on any CPU I could get my hands on, ultimately building a low-powered PiMiner with Satoshi Block Erupters, ASIC-based USB sticks (330 MH/s) from Adafruit (Lady Ada).

Devices and emails showcasing [TOKEN]’s journey in the crypto spaceAfter college I took the CS/Python course from MIT, and Automata Theory from Stanford to prepare for the master’s degree, where I studied mostly machine learning algorithms, computer vision, probabilistic graphical models and deep reinforcement learning. During that time, I won a couple of medals in programming competitions for aerial and ground-based robots, and participated in a large wind energy project involving the national wind institutes in Mexico and the United States. My research was funded by the National Science Council and National Institute of Statistics and Geography.

Right before the pandemic began, I started working remotely on my CS Ph.D. degree, training robotic agents using deep reinforcement learning in photo-realistic and physically accurate simulators with Unreal Engine and Unity. Then, I published my contributions in conference and journal articles, and quit my doctoral program, primarily because of ethical concerns about AI and the future of science in my country.

I decided to stay home and work full-time on Cardano while the world crumbles down. My Cardano preparation began more than a year ago, taking the MIT blockchain course from now SEC director Gary Gensler (who I will heavily quote) and a remote live certification on Blockchain with Cardano, learning cryptography up to zero-knowledge proofs. It was until I received my certificate that I felt confident enough to start my own stake pool. On New Year’s Eve 2021/2022 I purposely began deploying nodes to the cloud and registered TOKEN.

As someone that has been in the crypto space since 2011, can you describe the evolution you have witnessed? And with that in mind, where do you see the sector going in the next years/decades?

It is no coincidence that the first successful cryptocurrency was proposed by Satoshi Nakamoto in 2009, immediately after the economy collapsed due to an unsustainable collusion between investment banks, lending protocols and rating agencies. Who watches the Watchmen?

If you look closely, Satoshi’s birthday in Bitcointalk is April 5th, 1975. On that day, in 1933, FDR ended the gold standard. And in 1975, President Ford reversed this order. Which is until now the most plausible explanation.

Have you noticed that the word ‘blockchain’ is not present in Nakamoto’s paper? The original publication was more focused on cash-like digital money, the removal of trust and solving the double-spending problem. The genesis block was mined on January 3rd, 2009 and Satoshi stopped mining after 1 million Bitcoin, arguing that it was the community that should be in charge, removing himself and his identity, also being forced out by political pressure from Assange’s donation campaign.

Even though Bitcoin was somewhat decentralized, almost the entire trading volume from 2010 to 2014 was centralized in Mt. Gox, originally a trading card platform, which was bought and transformed into an exchange by Mark Karpelès. Mysteriously, it became insolvent and filed for bankruptcy. I avoided the whole thing and still received mail from Japan for the rehabilitation proceedings and recently received an NFT for being among the earliest 25% of the 1 million first users.

Email and NFT received from the Mt. Gox debacle

‘Not your keys, not your crypto’. It might sound trite, but being self-custodian of your money is one of the main principles. Would you like your assets to be frozen because your voice is too loud? Or maybe because of a desperate measure of your country to control inflation.

Cryptocurrencies have always been about proofs, how to prove your work or participation in the protocol, proof-of-stake (for native assets), proof-of-activity (PoW/PoS), proof-of-burn (validation by burning), proof-of-capacity (hardware storage),…, proof-of-coverage (IoT networks).

Proof-of-work validation in Bitcoin mining depends on hashrate and is evaluated against energy efficiency. As only one miner gets to mint a block, all other compute is wasted. This fact soon came to light and raised concerns about energy consumption in cryptocurrencies. Surprisingly, it had a positive effect on miners, most of whom switched to renewable energies. However, this process can only be optimized to a certain level and hardware is very specialized, rapidly becoming obsolete and thus somewhat risky to trade.

The proof-of-stake protocol reduces energy consumption by at least two orders of magnitude while not requiring application-specific devices like ASICs, but instead mid-tier computers, servers or instances, as well as a stake, creating non-custodial pools that smooth out the risk, with assets that can be liquidated immediately, as opposed to reselling hardware.

Besides proofs and protocols, cryptocurrencies will always be related to energy efficiency, Moore’s law and chip supply. Therefore, whoever controls our energy sources, like governments, will be able to control Bitcoin (and until now Ethereum) and any asset strictly tied to energy. Then, we should expect Cardano to lose correlation.

Cryptographic energy markets coupled to the grid could emerge, as there are microgrids of local communities exchanging electricity for digital assets. In similar fashion to the stock market and crypto exchanges, there are automated robotic energy brokers that can sell your excess power from solar panels or a wind turbine (or a share of your participation in a farm), and buy it back based on your consumer profile.

Besides running the stake pool, are you working on any other projects? Tell us more

I am writing this document while performing a migration of Token Stake Pool from the cloud, which is centralized and should be avoided, to a bare metal setup. TOKEN invested in an arm-based block producer running on a future-proof Mac Mini M1 with Asahi Linux. By migrating the stake pool, TOKEN was accepted as a member of the Armada Alliance, establishing the first pool based on ARM architecture in Mexico. Moreover, Token Stake Pool is powered by the Sun, using an array of solar panels for the whole operation. To abide by regulation, these are connected to the grid, although it is inspired by the off-the-grid (OTG) stake pool by WCat, who was a key element in this upgrade.

Being granted a license to shill, I would like to talk about a very special collaboration that began with an on-chain Tetris challenge, with my friend E0 (@0xD9E0), who is a very experienced microelectronics engineer and Cardano developer. From the start, he was open to discuss image manipulation and compact representations, being extremely knowledgeable about metadata and token distribution. He also has some of the earliest tokens in Cardano.

I’m glad to announce that we have been working for months on an animated pixel art on-chain collection of non-fungible tokens for the stake pool. These upcoming NFTs will act as utility tokens, which will boost your rewards by +16,0000 $TOKEN per NFT for each epoch, in addition to the +50,000 $TOKEN reward for staking with Token Stake Pool. As well as allocating part of the inactive supply to the single SPO vending machine operated by SEAL.

Some NFTs living on the Cardano blockchain

“A Bitcoin block adds 100 bytes in a ‘coinbase’. There are some people who express creative wit through art, secret messages in metadata.”

Fantastic. Any final words? Where can people stay in touch?

Never forget the true meaning and consequences of centralization, protect your freedom, resist oppression and government seizure of assets, our institutions do not represent us, forever strive for economic empowerment and redistribution of wealth.

Thousands of years ago, the least fortunate people in China minted their own ‘lucky tokens’ with a square in the middle, desperately looking for a community-driven economy, as we all still are.

For more information visit my website, you can always reach me on Twitter or at the Discord channel.

The $TOKEN asset analytics at Cexplorer.io.

You can support TOKEN by staking to the pool, and Armada Alliance by deploying low-powered nodes based on ARM and RISC-V.

Disclaimer: The opinions and views of the SPOs are their own and do not necessarily reflect those of the Cardano Foundation or IOG.