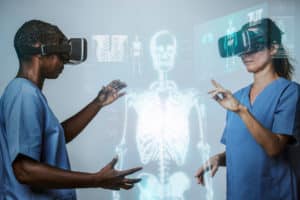 Talking to the dead may be possible thanks to AI

StoryLife is an artificial intelligence (AI) tool that could make it possible to talk to the deceased, or rather a kind of hologram of them that could converse with those who are still alive.

No, this is not an episode of Black Mirror.

The tool has already been used for this purpose during the memorial of actor Ed Asner who passed away in August 2021 at the age of 91.

“Nothing could prepare me for what I was going to witness when I saw it”,

In essence, Asner had recorded videos with StoryLife before he died, preparing so many possible answers to questions people might have asked him after his death.

The project was co-founded by historian Stephen Smith, who was head of Steven Spielberg’s dedicated Shoah Foundation.

The company is also currently working on creating archives of famous people so that fans can interact with them. For example, currently on the site one can talk to Tim Draper (no, he is not deceased).

Microsoft is studying talking to the dead

There is actually more than just StoryLife, and it seems that Microsoft is also interested in the topic.

Indeed, the Redmond-based company in 2020 had already registered a patent for a chat bot that could simulate the way the deceased write by studying their online behavior from social media.

There are also other companies working to make this possible.

For example, let’s talk about MyHeritage, the site that helps people compile their family tree also offers a service called “Deep Nostalgia”, which is used to animate family photos, even black-and-white ones.

HereAfterAI, on the other hand, helps record videos to narrate old photos and let relatives ask questions about the person’s life and experiences.

Talking to the deceased in the metaverse

All of this, of course, has also found its extension into the world of Web 3. In fact, the company Somnium Space wants to create avatars that are a mirror and immortal image of users, so that even after death, the avatar will not only have the same physical features, but will also be able to move and speak like the deceased.

The company was founded by Artur Sychov, who began thinking about this new use of the metaverse as many as 5 years ago, when his father was diagnosed with an aggressive form of cancer that would kill him within a few years.

The “Live Forever” feature is thus supposed to make it possible to reproduce not only the appearance but also the movements, tone of voice, and expressions of people and maintain a kind of database of these characteristics in order to have avatars that even after death can exist in the metaverse.

Naturally, the issue of privacy and the sale of data come into play here. In response to this point, Somnium Space responds that the project is decentralized, using blockchain, and will not sell any kind of data of users of the platform.

The post Talking to the dead may be possible thanks to AI appeared first on cryptodailynews24.com.