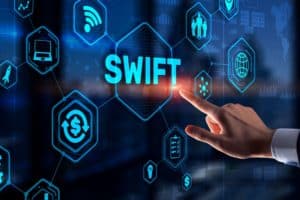 Russia: new alternative to SWIFT thanks to blockchain

A university in Russia is prepared to test a blockchain-based payments system similar to the SWIFT global payment network.

Russia testing blockchain to find an alternative to SWIFT

Among the many sanctions imposed by the international community on Russia after the aggression against Ukraine, perhaps the heaviest is Russia’s exclusion from SWIFT payments circuits. Russia has tried to get around this measure by linking up with China and its alternative circuit. But now a Russian university may have found an equally effective and alternative tool to banking SWIFT using blockchain.

Created in 1973 and based in Belgium, SWIFT links 11,000 banks and institutions in more than 200 countries. It is a security code assigned by the Society for Worldwide Interbank Financial Telecommunication (hence the acronym SWIFT) to identify each banking institution and precisely enable fast and secure international money transfers.

Russian state-owned Rostec said two days ago that one of its branches has developed a blockchain-based international transfer system, created in cooperation with St. Petersburg universities, which it describes as “a real alternative to SWIFT in international agreements”. Rostec has more than 700 operating subsidiaries, most of them in the defense sector.

The blockchain platform has been named CELLS, and was developed by the Novosibirsk Institute of Program Systems (NIPS) in St. Petersburg. It supports multi-currency payments, digital currency and identity. Its creators claim that the platform can process more than 100,000 transactions per second.

Comments regarding the new project

The university states in a note:

“The pilot version of the decentralized interbank financial messaging system is ready for testing and can be used in banks”.

“The system will make it possible to switch to settlements in national currencies, eliminate the risk of sanctions and ensure the independence of the national financial policy for clearing participants”.

Russia is relying heavily on blockchain and cryptocurrencies to try to circumvent these restrictions imposed by sanctions. Two days ago Ivan Chebeskov, Head of the Finance Ministry’s Financial Policy Department, told Reuters that Russia was seriously considering accepting international payments in cryptocurrency.

The post Russia: new alternative to SWIFT thanks to blockchain appeared first on cryptodailynews24.com.