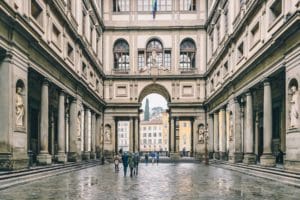 In Italy, it appears that the government has decided to block the sales of NFT masterpieces from its major museums. The controversy erupted after the Non-Fungible Token of Michelangelo’s work Doni Tondo was sold for €240,000, of which €70,000 went to the Uffizi Gallery in Florence.

According to reports, it appears that the NFT sale of Michelangelo’s Doni Tondo (1505-06) last year, minted by the Milan-based company Cinello in collaboration with the Uffizi Gallery in Florence, has triggered the Italian government’s current decision to block sales of NFT masterpieces.

Specifically, Massimo Osanna, director general of the Italian museums, has described this as follows:

“Since this is a complex and unregulated matter, the Ministry has temporarily asked its institutions [museums and archaeological sites] to refrain from signing contracts related to NFTs. The underlying intention is to avoid unfair contracts”.

And indeed, it appears that the problem is the terms of the contract. In the case of the Doni Tondo NFT, out of a total sale of €240,000, subtracting the €100,000 spent on “production costs”, the remaining €140,000 was split in half between the Cinello company and the Uffizi, as per the contract between the parties.

Not only that, the controversy stems from its very nature, namely from the fact that the works of Italy’s greatest museums are put up for “sale” as NFTs.

Thus, the sale of the Doni Tondi NFT seems to have activated the controversy that the Uffizi works may or may not be “sold” even if in their digital format.

In this regard, a spokesman for Cinello, said:

“All rights to the work remain with the museum that owns the original image. We create a new [image] related to our patent, which is the DAW or NFT. The collector who buys the DAW and NFT cannot display it in public exhibitions according to the contract; the work is only for private use. DAWs and NFTs are created precisely to maintain control – which remains in the hands of Cinello and the partner museums – and not to disperse [Italian] heritage in the digital world”.

At the same time, the Uffizi spokesman also stated the following:

“The museum did not sell anything, but granted the use of the image: the sale of the digital artwork is the responsibility of Cinello. It is false to say that the museum sold the copy of the Tondo”.

The museum’s collaboration with Cinello lasted for five years and expired in December 2021, with the contract providing for the production of 40 digital works, of which only the Tondo was sold.

Staying in Italy, it seems that recently the Ministry of Economy announced that it will allocate as much as 45 million euros for the development of Blockchain and artificial intelligence technologies, with application in various sectors.

The money will be available from 21 September 2022, with the purpose of implementing research and technological innovation projects related to the Transition 4.0 program.

Specifically, the €45 million fund will ease spending and costs of no less than €500,000 and no more than €2 million, in the areas of industry and manufacturing, the education system, agribusiness, health and environment, culture and tourism, logistics, mobility, security and information technology, and, lastly, aerospace.