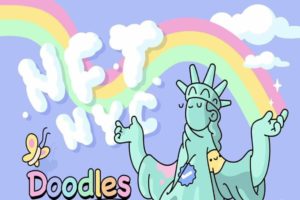 During the week of June 2022 at NFT.NYC, Doodles provided a springboard for those interested in the blockchain world.

See you in New York City!

This year’s NFT.NYC is the fourth annual gathering of the NFT industry, with the event founded in 2019.

The world’s largest NFT conference, held at the Palladium Times Square on Broadway from June 21-23, aims to market Web3 brands and bring together as many people as possible in New York City.

During the event, it became extremely clear that Web3 brands are becoming bigger and better than ever.

In fact, Doodles offered a live experience featuring pop culture with a real-life representation of the Doodles world and a series of announcements, including Doodles 2, an upcoming NFT collection with animated profile pictures, and Pharrel Williams was introduced as the company’s new Chief Brand Officer.

Color and creativity brought attendees into NFT.NYC‘s Doodleverse, a friendly Doodlebot, welcomed guests to the workshop where through the attractions present, all fans could “materialize” a brand new NFT Doodles 2 through the use of levers and knobs.

There were many different types of activities to be done during the Doodles event, such as being able to print your own custom Doodles-press t-shirt.

At the Genesis Factory, Doodles holders could also reserve a Genesis Box for $123, and reservations could be made in person at a lab machine.

Genesis Boxes represent a new part of the Doodles ecosystem; inside are a set of wearable devices that can be used in the upcoming Doodles 2 project.

NYC wouldn’t have been complete without a visit to the Genesis Factory by @doodles.
Who minted their Genesis Box? pic.twitter.com/kLh5NaVxhF

Doodle owners from around the world certainly enjoyed an exclusive experience, including the pass into “The Genesis Factory” and the reveal of Doodle’s founders at the after-party with special guests and access to the VIP Doodle Lounge.