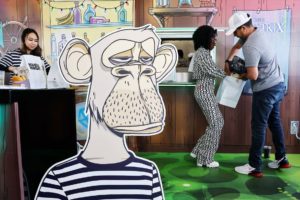 Bored & Hungry has announced that it will open its second NFT restaurant location in Seoul, South Korea, this fall of 2022.

Bored & Hungry and opening in the fall in Seoul, South Korea

The famous Bored Ape Yacht Club (BAYC) themed restaurant, Bored & Hungry, has announced that it will open next fall 2022, its second location in South Korea, specifically in Seoul.

That’s the second location as a fast-food restaurant after the one in Long Beach, California, but the first as the international headquarters of the Food Fighters Universe, the world’s first NFT restaurant group.

ready to get more out of your pfp? Food Fighters Universe is your all access pass to free monthly meals in our global restaurant network, secret dining experiences, merch, airdrops, and a universe of possibility

“ready to get more out of your pfp? The Food Fighters Universe is your access pass to free monthly meals in our global network of restaurants, secret dining experiences, merch, airdrops and a universe of possibilities. JOIN THE FOOD FIGHT.”

Recently, the question was raised that Bored & Hungry would stop accepting cryptocurrencies, in view perhaps of the prolonged bear market the sector is experiencing.

Confirming that this was fake news was actually the founding entrepreneur of Bored and Hungry, Andy Nguyen, who explained on Twitter that the NFT-themed restaurant in BAYC has always continued and will continue to accept cryptocurrencies. In fact, the only cryptocurrencies accepted by the fast-food restaurant are ApeCoin and Ethereum.

Still, Nguyen also showed that the famous rapper Snoop Dogg, known in the NFT world for a long time, is also in close contact with Bored & Hungry. According to some rumors, Snoop Dogg himself could launch a Bored Ape-themed restaurant in Los Angeles.

The Price of ApeCoin (APE)

Analyzing the price of ApeCoin (APE), the 35th cryptocurrency by market capitalization with a dominance of 0.16%, its trend over the past month has followed Bitcoin’s trend, albeit with some differences.

In fact, at the time of writing, APE was worth $4.99 versus $5.95 last month. Definitely in dumps, but APE’s price has fluctuated sharply over the month, arriving on June 28 at $5.49, the same day that Nguyen showed with photos and video that the NFT restaurant was still accepting cryptocurrencies.