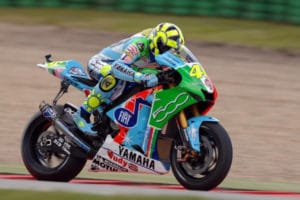 Valentino Rossi, 9-time world champion, is back on the track, but this time he does it by racing in the metaverse.

Valentino Rossi’s VR46 brand expansion into Web3 and the metaverse

The “Doctor” this time decided to create flagship products that can inspire motorsport lovers. To this end, he has created a new company through a joint venture with The Hundred, the Italian media holding company par excellence.

The company will be called VR46 Metaverse and will accompany the already existing VR46 Racing Team and Academy divisions, aimed at those who want to learn the secrets of the trade. All under the umbrella of the VR46 brand and guided by the expert eye of Valentino Rossi.

VR46 Metaverse will aim to develop and bring to market innovative entertainment products. The perspective will follow the vision of the evolution that the Web3 is experiencing, with a focus on gaming, NFTs and, indeed, the metaverse.

This will allow the motorcycling champion not only to return to soaring on virtual circuits but also to compete on four wheels.

In fact, for Valentino Rossi it has always been like a forbidden dream, so much so that in 2006 he came close to getting involved with Ferrari.

And now, the “Doctor” explains in an interview how driven he is by the thought of challenging F1 champion Lewis Hamilton on the tracks of the metaverse.

Statements from those involved in the VR46 Metaverse project

“The Hundred will provide its know-how in the industry to develop virtual experiences dedicated to Valentino Rossi’s large number of fans around the world, motorsports enthusiasts and gamers in general”.

The goal of VR46 Metaverse is to bring MotoGP fans even closer to this exciting world through experiences that become increasingly immersive.

This platform, dedicated to the Doctor and his enviable career, will be able to take fans on a fantastic journey. Users will have the opportunity to meet riders in the metaverse, interact with a large community and, most importantly, compete in exciting races.

The project is obviously not only dedicated to hardcore fans, but also invites a vast number of video game lovers.

Valentino Rossi is keen to reveal that:

“Entering this industry is a really exciting adventure that I have decided to take on in a structured way together with level-headed partners. It excites me to be able to reach fans around the world, bringing them the atmosphere and enthusiasm of VR46 through new technologies, and I think this project marks a very important step forward for the brand”.

For those who do not like waiting, the first content is already planned for this year, and the developers, in support of the potential of this technology, state that:

“They will immediately be able to immersively and actively engage both Valentino Rossi’s historical fan base and the new audience generated by the growth of these new technologies”.

The post Valentino Rossi gets back on his VR46 by racing in the metaverse appeared first on cryptodailynews24.com.