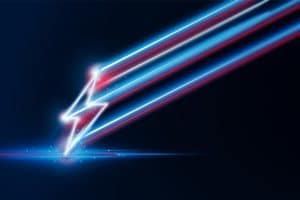 In recent days, Lightning Network has set a new all-time high, a record of 4,000 BTC deposited on the network

LN is a second-layer solution for Bitcoin transactions that makes them extremely fast and cheap. Because of this, and the fact that it is now considered a secure tool since it has been working well for a few years, it is increasingly being used especially for transactions of low amounts.

In order to use LN, it is necessary to have special wallets, on which BTC must be deposited. Using on-chain analysis tools it is possible to calculate how many BTC in total are deposited on LN channels.

In recent days, for the first time in history, the number of BTC locked in total on all LN cchannels exceeded 4,000.

At the end of 2020, which was before the latest big bull run was triggered, there were about one million total BTC deposited on LN channels, so in two and a half years there has been a fourfold increase in what is commonly called the “network capacity” of Lightning Network.

The boom took place primarily after the announcement that El Salvador had decided to make Bitcoin legal tender in the country, precisely because using BTC to send small amounts is convenient only through LN.

This real surge had ended in late September, shortly after El Salvador’s news, but the growth did not stop. At that time, in fact, there were almost 3,000 BTC deposited on LN channels, and basically they have never really stopped growing since then.

In other words, the capacity of the Lightning Network grew by 33% even during this bear market.

It is worth noting that the cost of normal first-layer transactions on Bitcoin’s blockchain has dropped a lot, especially during the LN boom last year, going from about $10 in May 2021 to $0.3 in late July of that year. Since then it has rarely exceeded $1.5, remaining almost consistently below the dollar.

The advantages of the Lightning Network over Bitcoin

With LN, however, the cost of transactions is not counted in tenths but in thousandths of a dollar, and the fact that they are almost immediate transactions turns out to be most useful for those who, for example, use BTC as a means of payment.

One parameter that gives an idea of what the threshold might be below which LN is preferred over traditional on-chain transactions is the median value of the single transaction recorded on Bitcoin’s blockchain.

So if the median value of the transactions that are recorded daily on Bitcoin’s blockchain is as high as $500, it means that a large number of transactions of smaller amounts are now executed through LN without going through the blockchain.

It is enough to mention that in April 2021, before El Salvador’s announcement, an average of more than 300,000 transactions were recorded on Bitcoin’s blockchain every day, while now less than 250,000 are recorded.

It is also worth mentioning that more and more crypto exchanges now offer the possibility of depositing and withdrawing even very small amounts in BTC using LN.