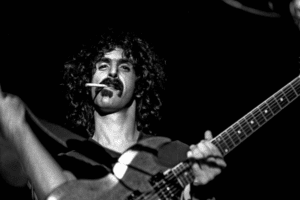 Frank Zappa landing in the metaverse

Frank Vincent Zappa (1940-1993), was a phenomenal American composer, guitarist, singer and multi-instrumentalist. He is considered by many to be one of the greatest musical geniuses of the 20th century.

Universal Music, a multinational music corporation, has for many years already acquired ownership of Zappa’s entire music catalog, arranging for several vinyl reissues of his most famous pieces and the high-resolution remastering of many recordings, many of which are yet to be released.

Recently Universal Music decided to go a step further, announcing that it would enter the world of Web 3.0.

Frank Zappa’s music will live on, now with a new audience in the metaverse

Universal Music has also announced that it will position itself in the new phygital universe, giving Frank Zappa fans a new immersive experience in the artist’s life and works.

From what has been stated, it seems that the corporation wants to launch an NFT collection first and then, only later, move on to the metaverse experience.

Therefore, it can be said by now that all sectors, starting with the gaming industry, and then moving on to fashion, sports, cars, and even music, are moving to be able to strategically position themselves in the Web 3.0 world.

All the biggest giants have already intercepted and assimilated the tremendous technological change that is taking place!

The decision to revive Zappa through a new communication channel is certainly forward-looking and avant-garde.

The project, however, would still be in its infancy but already underway.

“We will continue to develop innovative ways to celebrate his vast and influential catalog for both longtime fans and those just discovering his genius. As a prolific artist well ahead of his time, Frank Zappa was constantly creating and recording and he left behind a treasure trove of extraordinary still unreleased music and video in his Vault that will help us usher in the next era of Frank Zappa fans”.

A major breakthrough for Universal Music

Certainly, it is not necessary to be an expert in technology and music history to understand that Universal Music’s business model appears beyond successful.

Their rights acquisitions have led them to have assets currently valued at about $30 million.

For Universal Music, this is not the first experience in the world of Non-Fungible Tokens. In fact, the corporation had already tried to monetize by creating NFTs out of the life of LimeWire.

Now, however, it is Frank Zappa’s turn.

It will be a delight for fans of music and especially, of Zappa, to see how they will be able to repurpose the singer’s masterpieces, in a totally new and contemporary key

The post Frank Zappa landing in the metaverse appeared first on cryptodailynews24.com.