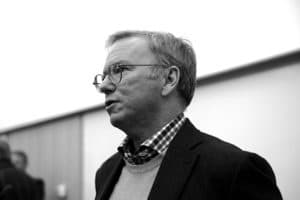 Eric Schmidt: former CEO of Google vs the metaverse

Former CEO of Google, Eric Schmidt said he is opposed to the metaverse, mainly because:

“There is still not a clear definition of the concept and how it will affect people’s lives”.

According to Eric Schmidt, we still need to understand clearly what the metaverse is and how it will affect people’s future

Indeed, during the Aspen Ideas Festival event held a few days ago in Aspen, Colorado, Schmidt expressed all his skepticism against metaverses and against Facebook, which in October 2021 even changed its name to Meta to make it a priority to enter the field.

“There’s not an agreement on what the metaverse is, even though one company has changed its name in anticipation of defining it”.

Schmidt also said he was skeptical about applications of the metaverse in real estate, explaining that people will not really need to have these virtual lands:

“I’m not worried about buying large swaths of private real estate in the metaverse myself. It’s not a concern I have every day”.

The former CEO of Google was perhaps also alluding to the company itself, which in March 2022 filled out a patent for “non-fungible planet” with the aim, perhaps, of approaching the NFT and metaverse worlds.

The hype behind the metaverse

According to a recent report by Chainalysis, metaverse in gaming and real estate are the fastest growing sectors.

In addition, according to DappRadar’s website, blockchain-based gaming activity increased by 2,000% in the past year, raising $2.5 billion in funding last quarter, a 150% increase over the previous quarter.

One of the Italian projects related to VR and metaverse, OVER, has also grown a lot in the last period. In the last week alone, it sold more than 560 virtual lands.

The post Eric Schmidt: former CEO of Google vs the metaverse appeared first on cryptodailynews24.com.