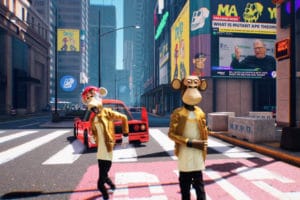 Timbaland, famous US record producer, rapper and songwriter, left everyone speechless at the BAYC Ape Fest in NYC with the launch of his new video – “Has a Meaning”.

The producer decided to center his latest track on his Bored Ape #590 nicknamed – Congo, his musical alter ego.

The Bored Ape and IP rights

The NFT #590 from the BAYC collection owned by Timbaland

BAYC’s marketing strategy is proving to be truly foolproof.

For as we all know, all owners of a Bored Ape can use their NFT monkey to create anything.

From the very beginning, the BAYC community decided to hand over the IP rights of their own products to the owners of a Bored Ape, leaving room for artists like Timbaland to exploit the unlimited potential of NFTs.

“Has A Meaning,” the music video starring Congo, is thus a testament to the creative potential of NFTs for both collectors and creators.

It will thus be considered, without a shadow of a doubt, the first iteration of a brand new multimedia form and a major step forward for Web 3.0.

Timbaland’s choice can be called pioneering.

Even the US producer, aware of his revolutionary attitude, said in one of his interviews:

The collaboration between Timbaland and Zayd Portillo

Before embracing this new way of producing music videos, Timbaland sought out a select team of experts who could really guide him on his new path.

The rapper eventually decided to collaborate with the talented Zayd Portillo (@creatrgod).

Timbaland then fully immersed himself in every step of the production process.

First, the rapper recorded and produced the song, and only then did he collaborate with Portillo to bring the music video to life through the use of Unreal Engine, a 3D creation tool known for its hyper-realistic visuals.

Timbaland himself in the video played both main motion capture roles, wearing a high-tech suit studded with sensors and cameras that tracked everything, every little movement, all facial expressions and even eye movements.

An amazing technology that enabled the creation of absolutely lifelike CGI characters.

The video release on glass.xyz was set for 30 June.

Users can also download the song as an MP3 via airdrop. The mint, a limited edition of 100, began the same day at 5:30 PM ET.