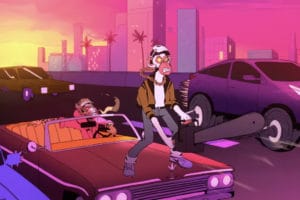 Snoop Dogg and Eminem together in latest video with Bored Ape

The new single by the two famous rappers, Snoop Dogg and Eminem, features a tribute to the NFT world with Bored Ape Yacht Club-style animation.

Took too long to reconnect with @snoopdogg– you know we had to make a movie! https://t.co/087W2OZJOI #FromTheDToTheLBC #curtaincall2 @BoredApeYC pic.twitter.com/k443JqXHON

The latest NFT.NYC and Ape fest 2022 featured a preview of the new video by the two rappers who have purchased work from the world-famous apes. Last December, Eminem paid $425,000 to acquire a Bored Ape piece, nicknamed “Eminem Ape”. Snoop Dogg not only bought a whole set of the famous apes, but in March he launched his own NFT collection on Cardano.

The video is to accompany a new song, “From The D 2 The LBC”, which is mainly about marijuana, and which constantly ties in with the images of the related animated-style characters from the famous collection, reproducing the two rappers as two Bored Ape apes.

According to rumors, Snoop Dogg is also planning to launch a Bored Ape-themed restaurant in Los Angeles, as tweeted on the profile of Food Fighters Universe, the company that is expected to partner with the rapper in the project.

Never in my life would I imagine having @SnoopDogg as our business partner. As we've got a lot of ideas in the tank, that we're working to bring to life. And just so you know, he's very involved in the entire process of what we're developing. pic.twitter.com/iFDqVIH7Jf

There are many artists who have been eyeing Bored Ape Yacht Club’s NFTs in 2021, such as pop star Madonna, who reportedly spent more than $560,000 to secure a piece from the collection.

However, the NFT market, after growing by more than 20,000% in 2021, declined in early 2022, perhaps dragged down by the entire cryptocurrency market as well. The ApeCoin token, in just a few months since its launch, has lost 39% of its value, coming in at $4.91, after hitting a high of $27 in April. According to Verge magazine, even the same NFT purchased by Eminem would now be valued at $150,000.

The post Snoop Dogg and Eminem together in latest video with Bored Ape appeared first on cryptodailynews24.com.