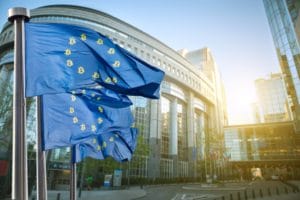 MiCA crypto regulation could arrive at the end of June

The crypto regulation of Markets in Crypto Assets, commonly referred to as MiCA, has been a pipe dream for a long time and has been delayed for various reasons, but it may now be arriving at the end of June.

According to a tweet posted by Patrick Hansen, venture advisor at Presight Capital and EU contributor on cryptocurrency, regulation would soon be on the way. To be precise, the deadline would be June 30, 2022.

The MiCA, the European regulation in the crypto sector, is about to arrive

Regulation of an asset as young as crypto, but very attractive to capital and the curious, could be a good thing, and certainly both the European Central Bank and states have realized this.

It is common knowledge that getting everyone to agree, in particular in such an established industry despite having little more than a decade under its belt, is a tough thing to do, and this has contributed to bureaucratic delays and discussions to find a team.

But what happened with the failure of Luna and Terra has given a boost to regulation, putting institutions in a more stringent need.

Of course, it is hoped that these new rules will not erode the industry to the point where it becomes impossible for companies to operate in it.

In fact, for years crypto people, including Vitalik Buterin, have been calling for clear regulation so that more and more companies, startups and investors can get into it. The problem is that to achieve what almost seems like a utopia would require crypto-friendly regulation and not dozens and dozens of unnecessary barriers, rules and bureaucracies.

Will NFTs be included in the MiCA?

In any case, the occasion has led to agreements on almost all points except one broad question, namely whether or not to include NFTs in the MiCA.

In this regard, in the last few days it appears that it has been decided to leave them out, but to put limits on the companies that create them, as will occur for tokens and stablecoins having major restrictions primarily in terms of use. Those who issue NFTs and have large volumes will apparently need a CASP license.

CASP is an anagram for Crypto Asset Services Providers, which is a directive aimed at combating money laundering. Specifically, it is a registry devised by Cyprus and likely to spread throughout Europe with the MiCA.

The issue of stablecoins

Naturally, after the collapse of the UST stablecoin, the focus of the MiCA is mainly on these particular cryptocurrencies pegged to fiat currencies and other assets.

Again according to Hansen’s tweet, the new rules will not extend to algorithmic stablecoins such as DAI. Issuers of e-money tokens and so-called “asset-referenced-tokens” will be highly regulated.

Thus, the European Commission, European Council and Parliament will in a few days bring to life the long-awaited MiCA regulation, or at least that is what Patrick Hansen, venture advisor at Presight Capital, believes.

Indeed, in a recent tweet, the expert explained why and what will be included in the agreement:

“The two most important EU crypto regulations to date, the MiCA and the TFR, are expected to be finalized by the end of June. They have major implications for the crypto market in the EU and beyond. The latest trialogue between major institutions EU is set for June 30, almost all the most important issues have already been addressed (and we are already in agreement). There are still some issues to discuss. Do NFTs have to be inside or outside the MiCA? The committee wants to include them to protect consumers, the Council and Parliament were against, but they seem to have accepted a compromise. NFTs are likely to be largely exempt, but companies offering related services will not. They will need CASP licenses (little ones will probably be exempt). Stablecoin: the main aspects have been fixed. No exemptions for algorithmic stablecoins. Meticulous regulation for those who issue tokens and stable linked to assets. MiCA also introduces an option for EU authorities to stop issuing stablecoins if used on a large scale for payments. Still to be discussed the threshold for being considered as “significant” and who will be the supervisor”.

DeFi excluded from regulation. For now

It appears that decentralized finance is thus excluded from regulation for now, although Hansen’s tweets state that the European Commission will continue to study the sector in order to regulate it in the future.

For now, a pilot project to oversee DeFi projects will in fact be launched.

3/5 For now, the EU Commission seems on a reasonable path. It wants to

Does the MiCA want to stop Proof-of-Work?

What the MiCA is most concerned about is the ban on Proof-of-Work. In fact, even according to Hansen, this regulation could include a strong stop to PoW-based cryptocurrencies because of their energy consumption.

As early as the end of March, the idea was floated that the EU would ban PoW-based projects, but that seemed to have stopped. Unfortunately, it seems, instead, that this proposed law to combat mining is back in vogue, so it will remain to be seen how Bitcoin can continue to operate.

The post MiCA crypto regulation could arrive at the end of June appeared first on cryptodailynews24.com.