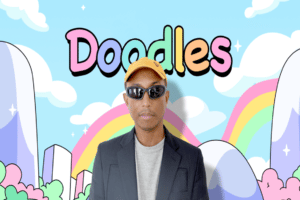 Doodle NFT chooses Pharrell Williams, the music producer, as Chief Brand Officer by expanding its team with high-profile individuals. The announcement was made in front of Doodle’s followers at NFT.NYC.

During the NFT.NYC event, in front of Doodles NFT holders, the project announced that it has a “new addition” to the team as Chief Brand Officer: Pharrell Williams. Here is the announcement on the social network:

Announcement 2: @Pharrell joins the team as member of the board and Chief Brand Officer. He will Executive Produce music projects, produce animated film & tv, and creative direct product launches. pic.twitter.com/v37Eh4gYqd

“Announcement 1: @alexisohanian’s @sevensevensix to lead Doodles’ first ever fundraise, with founding partner @katelin_cruse joining our Board of Directors.

“Announcement 2: @Pharrell joins the team as member of the board and Chief Brand Officer. He will Executive Produce music projects, produce animated film & tv, and creative direct product launches”.

According to reports, Williams appeared on the big screen during the event with a video dedicated to the Doodles NFT holder crowd, commenting on the news as follows:

“I’m a big fan of the brand. We’re going to build from the core community outward and bring Doodles to new heights, new levels”.

Doodles NFT had also recently announced the project’s new CEO, Julian Holguin, who arrived in May from Billboard.

Apparently, in this crypto winter period, which also affects the NFT industry, Doodles is focusing on engaging high-profile figures so as to ride the wave.

These are thus three models made available to developers that focus on speech and human sounds in videos, designed to push us toward a more immersive reality at a faster pace.

The new models are an outgrowth of something Meta has already pioneered with its first generation of Ray-Ban Stories glasses that include outdoor speakers that transmit sound directly to the ears.

Gucci collaborates with SuperRare and The Sandbox welcomes Time Square

Recently, it seems that the NFT industry has taken on global giants.

On the one hand, Italian fashion brand Gucci, which, in order to continue its NFT journey, has partnered with SuperRare to create its own online space called Vault Art Space.

On the other, TIME Square entering The Sandbox metaverse through its collaboration with TIMEPieces, becoming a virtual hub for art and commerce.