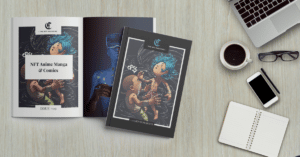 The NFT Magazine: Metaborg by Giovanni Motta on the ninth cover

The NFT Magazine, a project created by cryptodailynews24.com and ArtRights, is now in its ninth edition.

The magazine will be available for public sale on OpenSea starting on 2 July, at a cost of 0.05 ETH, with a work by Italian artist Giovanni Motta on the cover, featuring his blockchain comic project called Metaborg.

The private sale, on the other hand, will be on sale on Thenftmag, the project’s official website, from 28 June 2022.

It is worth noting that almost all previous issues of NFT Magazine have sold out and have totalled over 100 ETH.

Giovanni Motta on the ninth issue of NFT Magazine

The subject of this ninth issue is NFT comics, i.e. all those manga and comics projects based on blockchain, like Giovanni Motta’s Metaborg.

Those who have bought The NFT Magazine will also be able to get a PASS to mint a Metaborg Manga NFT on metaborg.io, same as collectors who will be awarded NFTs from the Genesis Drop on Nifty Gateway on 7 July starting at 12 AM (CET).

Those who own the various copies of The NFT Magazine also get benefits such as the NFTM token, the whitelist for various projects with which the team collaborates, events and much more, as well as the possibility to read the magazine itself.

The Readers Club was created as an aggregator for holders of The NFT Magazine to exchange opinions and also suggest themes and artists to be included in future editions.

The post The NFT Magazine: Metaborg by Giovanni Motta on the ninth cover appeared first on cryptodailynews24.com.