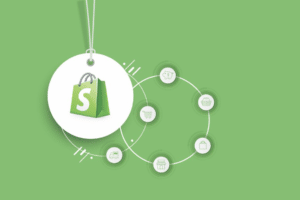 The popular platform for creating e-commerce, Shopify, recently launched over 100 new features, including one dedicated to the world of NFTs.

It is called Tokengated Commerce and allows customers to link their crypto wallets to stores on Shopify, so that those with specific NFTs can unlock exclusive products and experiences.

The initiative is part of the Connect to Consumer (C2C) strategy, which is the call for brands to create strong connections with consumers based on authenticity, loyalty and trust.

Through Tokengated Commerce, merchants will be able to leverage NFTs to further strengthen their relationship with their community, rewarding loyal customers and turning them into true fans.

In addition, they will also be able to experience special moments both online and in their physical shops via Shopify Point of Sales.

Tokengated Commerce will also enable collaborative synergies between brands like never before, as one brand’s NFT could also provide access to other shops.

Shopify also announced an alliance with Google to simplify local proximity shopping. The partnership includes the ability to synchronize one’s inventory with Google, so that, for example, nearby customers are automatically informed when a product is available in the shop

Shopify is used by millions of companies in 175 countries worldwide, including Italian companies such as Velasca, Manebì, Depuravita and Benedetta Boroli.

Shopify’s ambitions in the e-c world

“At Shopify, we believe in the infinite game. That means we’re constantly pushing the boundaries of what’s possible for entrepreneurs. We work hard to solve the complex challenges merchants face today while imagining entirely new ways for them to grow their businesses. With Shopify Editions, we’re sharing our big bets and latest innovations in commerce so that those ambitious enough to try their hand at entrepreneurship can start and scale faster than ever before”.

“Shopify is betting on Connect to Consumer as the new era of commerce in which brands can succeed if they can cultivate a community of brand loyalists. Today, personalisation is the key to development and independent brands need to be able to create bespoke experiences across all touchpoints that keep the relationship with customers alive.

With the innovations presented at Editions, we will give them the concrete support they need to achieve this goal. The series of announcements comes at a time of strong growth for Shopify in Europe and Italy, a strategic market for the company, where the number of merchants is constantly increasing”.