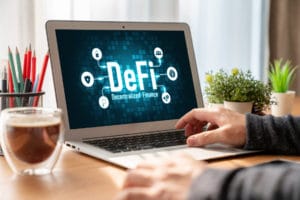 DeFi grows, but still without an Ethereum-killer

A new report published recently by Chainalysis revealed that although the DeFi ecosystem is growing thanks to the emergence of new layer 1 blockchains, no true Ethereum-killers continue to emerge yet.

The chart shows that interest in blockchains like Algorand is growing

To be fair, layer 2 blockchains, such as those that are themselves based on Ethereum, are also increasing, but in theory it is only the layer 1 ones that could really compete with Ethereum.

Indeed, in the past many new layer 1 blockchains have claimed to want to compete with Ethereum, but as yet none have succeeded, especially in the DeFi arena.

DeFiLlama now has as many as 124 blockchains, with over $74 billion in TVL (Total Value Locked). Of this amount, nearly 64% is locked on the Ethereum blockchain.

Despite a higher average transaction cost, Ethereum remains by far the preferred layer 1 blockchain for users of decentralized finance protocols.

The report reveals that several new layer 1 blockchains that have emerged lately have grown to gain a role in the growing Web3 ecosystem. For the most part, these new blockchains have presented themselves as alternatives to solve Ethereum’s very problems with scalability, and especially with the high cost of fees.

The question Chainalysis is asking is whether any of these will be able to overtake Ethereum in terms of mass adoption.

People generally use the term “Ethereum-killer” to identify these alternative blockchains that could overtake ETH, but so far none have been able to do so.

The competitive advantage of the Ethereum ecosystem.

Ethereum still appears to be far ahead in terms of, for example, overall daily transaction volume, including in the so-called Web3 and NFT field. In addition, the future move to PoS, and other Layer 2-based solutions, could help greatly in reducing the cost of gas.

The authors of the report write:

“If Ethereum’s entrenched status as the number two blockchain behind Bitcoin is already allowing Ethereum to fend off competitors, it seems especially unlikely that another smart contract-enabled blockchain will challenge it should these changes prove successful”.

At this point a second question arises: if these new alternative layer 1 blockchains are unable to truly challenge Ethereum, will they survive?

This question is not really answered, but it is pointed out that the crypto winter may slow down investment in alternative Layer 1s, and that Web3 may become a winning market again with Ethereum as the dominant player.

The post DeFi grows, but still without an Ethereum-killer appeared first on cryptodailynews24.com.