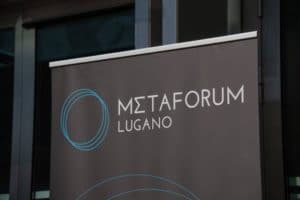 Metaforum: more than 500 people in Lugano for the first edition of the event

On 13 June in Lugano, Switzerland, cryptodailynews24.com and Finlantern organized the first edition of the Metaforum event.

Great success for the first edition of the Metaforum in Lugano

The conference was held at the LAC museum in Lugano with over 500 people in attendance.

Among the speakers present was John Crain, CEO and co-founder of SuperRare, who gave a keynote in Europe for the first time.

In addition to him there were many other international speakers such as Pavel Matveev, co-founder of Wirex, Massimo Morini, Chief Economist Officer of Algorand Foundation, Alberto Maiorana, Head of Licensing at Sorare, Bitcoin maximalist Giacomo Zucco and many others.

Furthermore, a treasure hunt also took place during Metaforum, organized by The Nemesis, both in real life and in the metaverse, with many prizes including a Ledger Nano, Companion’s NFT, Cryppo, The NFT Magazine and various t-shirts and stickers.

There were also several panels on Non-Fungible Token and metaverse with Noku, Binance, Italian and international artists and many sponsors including 21 Shares, PLC Ultima, Httpool, Seba Bank and Goat Nation.

Special thanks also to the many media partners such as Forbes Italia, Money.it, Corriere del Ticino, Uni Money, Artuu, ArtRights magazine and others.

As mentioned, this was only the first edition of Metaforum, but we are already at work on the 2023 edition, which will probably also be held in Lugano next summer.

The post Metaforum: more than 500 people in Lugano for the first edition of the event appeared first on cryptodailynews24.com.