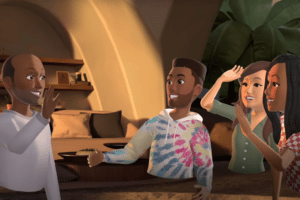 On Meta Quest, it is now possible to hang out with others, watch movies together and launch multiplayer games from Meta Horizon Home. All you have to do is wear a Meta Quest headset.

Here’s what the announcement says:

“With v41, we’re taking a step towards that long-term vision. As part of this update, we’ll begin gradually rolling out the ability to invite friends to your Meta Horizon Home environment and hang out, coordinate your next gaming session, and even launch your group straight into supported multiplayer experiences (including Beat Saber, Demeo, and Echo VR)”.

At last year’s Connect, Mark Zuckerberg shared his vision of Meta Horizon Home as a personal user portal for the metaverse.

Basically, the CEO of Meta would describe Horizon Home as a place to hang out with friends, to customize and make your own, somewhere to create memories.

Users will also be able to relax in a virtual movie night by sharing it with friends via Oculus TV, which offers services such as films, documentaries and on-demand concerts.

Recently, Meta also announced new features to be launched in the coming weeks and an expansion to UK citizens for Horizon Worlds.

Among many others, users will be able to choose how to listen to people who are not on their friends list, including the option to turn off unwanted conversations completely. This is a way of offering greater security and comfort to users.

This feature is in addition to the “personal boundary” feature already introduced in March, which aims to increase privacy and security of the virtual world and its users.