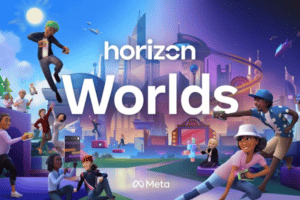 New features and an extension to UK citizens for Horizon Worlds, Meta’s metaverse, which is starting to gain momentum.

The new features of Horizon Worlds

The expansion of Horizon Worlds continues

Meta announced in recent days a new feature related to voice settings for its users of Horizon Worlds, the virtual world in the metaverse.

Launching in the next few weeks, the feature allows users to choose how to listen to people who are not on their friends list, including the option to turn off unwanted conversations completely.

Meta is said to have created this feature to offer its users additional security and comfort in what still appears to many as a big mystery. As Facebook engineers explained, when voice mode is activated, people who are not on one’s friends list or in one’s virtual group will see an icon indicating that a user has the possibility of muting them.

To temporarily disrupt someone’s speech without having to add them as a new friend, simply bring the controller close to their ear.

In March this year, Meta introduced another function called ‘personal boundary’, which again aims to increase the privacy and security of the virtual world and its users. This function allows a kind of distancing between unknown users, to avoid unpleasant incidents, which had already taken place in the past in the metaverse.

The option is also active by default for those who are considered ‘strangers’. This had been the consequence of a complaint by one user (avatar) about having been groped by a stranger, and that of a second who claimed to have been gang-raped.

Last April, Zuckerberg’s company announced that it was testing new tools to allow its Horizon Worlds users to monetize their presence in the virtual world by selling virtual goods or services to the community that frequents the virtual space.

Moreover, as of next week, the field of possible participants in Horizon Worlds is widening. After having launched the service in December for the US and Canada, it will now also be available for British users and probably after the summer for all European citizens.

A statement on the company blog reads:

“From the very beginning, we’ve envisioned Horizon Worlds as a creator-friendly VR environment featuring top tier social world-building tools. And by developing those tools and listening to and incorporating feedback from creators, that’s just what it is. But we’re always working to make it even better. For example, last month we launched our first asset library, a collection of pre-made items that creators can use any time they want. Plus, we’ve also committed $10 million USD to help creators get their worlds off the ground”.