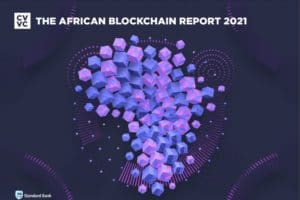 Standard Bank has released the African Blockchain Report 2021, which measures blockchain investments on the African continent.

Total investments in the blockchain sector in Africa in 2021

The report shows that Africa is a sort of crypto-continent, and an international driver in the widespread use of blockchain as a “transformative technology for humanity”.

Standard Bank is one of South Africa’s largest financial groups, operating in 20 different countries on the continent, so it knows that reality very well.

Standard Bank’s report reveals that between July 2020 and June 2021, cryptocurrency adoption in Africa grew by over 1,200%. This makes it one of the fastest-growing continents in this respect.

It is a continent made up of extremely fragmented cultures and countries, but for the first time a technology is bringing people and economies together in ways yet to be experienced.

In addition, the lack of commonly used legacy financial systems and a huge unbanked population contribute to the popularity and growth of cryptocurrencies in Africa.

In addition, it has one of the youngest populations in the world, which further encourages financial development.

The current state of affairs in Africa creates ideal conditions for accelerating the adoption of blockchain technology, as it allows for real-world problem-solving.

However, in the face of a thriving blockchain ecosystem and a high rate of cryptocurrency adoption, the data and information available for blockchain-related activities in the region is fragmented and poorly disseminated, making analysis in this regard difficult.

The report was compiled by CV VC, in collaboration with Standard Bank, precisely to address this lack or fragmentation of information.

CV VC is a Swiss startup that invests in blockchain projects and in Africa wants to foster the development of this technology to generate greater socio-economic prosperity.

The opportunities for industry expansion on the African continent

In Africa, investments in blockchain projects account for less than 0.5% of global investments, but despite this, they increased by 1,668% in the first quarter of 2022 alone, compared to the same period last year.

The areas where the most is being invested in are those where this technology can be used to overtake old bureaucracy and inefficiencies.

The report reveals that in 2021, African blockchain companies raised $127 million, or 0.5% of all funds raised worldwide in this sector. Most of these funds, 122 million, went to projects in only four countries, namely Nigeria, Kenya, South Africa and Seychelles.

In the second quarter of 2022, the projects that raised the most were Jambo (Congo) with 30 million, MARA (Nigeria/Kenya) with 23 million, and Afriex (Nigeria) with 10 million.

So far, no mega-deal has yet occurred on the continent, as the single largest raised was by the South African exchange Valr with $50 million in the first quarter of the year, and there is no blockchain unicorn yet.

It is worth noting that on the continent there are only 6 countries that have explicitly legalized the use of cryptocurrencies, and 17 where the legislation is unclear in this regard, but as many as 27 where there is in fact an implicit ban, and 4 where the ban is explicit.

The picture is therefore one of a crypto economy that is still relatively small, but growing fast, operating within a generally favourable environment still filled with hostility.