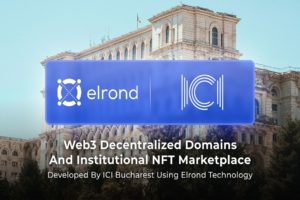 The Romanian National Institute for IT Research and Development, ICI Bucharest, is using Elrond Network technology to create the first institutional NFT marketplace for an EU country, and a decentralized Domain Name System (DNS/TLD).

This was reported by Elrond Network’s founder and CEO, Benjamin Mincu.

Romania’s National Institute for Research and Development in Informatics is leveraging the @ElrondNetwork architecture to build the first EU institutional NFT Marketplace and decentralized DNS/TLD.https://t.co/2eryzLVeI5

Elrond Network is a project born in Romania, and Beniamin Mincu is Romanian, hence contacts with the country’s institutions led to this kind of institutional collaboration.

Indeed, the Bucharest ICI is working on the creation of decentralized Web3 domains and an institutional NFT marketplace, and has chosen Elrond Network’s blockchain as the platform on which to develop these projects.

These are the first initiatives of their kind in the European Union, and work is already underway thanks to a collaboration between the ICI Bucharest and the developers of Elrond Network.

It is therefore no coincidence that today Elrond’s EGLD token is gaining 12%, after yesterday’s sharp drop.

The current price is still 35% lower than it was a week ago, and 92% below the November highs, but thanks to this news, something has also moved in a positive direction.

The Romanian National System for Issuers and Digital Assets will probably be the first of its kind in the European Union, and will consist of a public-institutional marketplace for digital assets that will use Elrond’s Decentralized Identity and Non-Fungible Token (NFT) technology to digitize, access, transfer and store official documents, property deeds or various certificates.

The standardized format will serve to simplify integration with other systems and facilitate the digital transformation of public administration.

ICI is also trying to build a decentralized DNS with top-level domains (TLDs).

“The goal is to evolve the collaboration between citizens and institutions using a modern digital framework. Web3 technologies can transform public administration and help its institutions and processes leap forward in terms of efficiency and speed, while decreasing costs, overhead and excessive bureaucratic activities”.

“The intersection of governance and technology creates a universe of opportunities for advancing society. It is the right time to take the initiative along with our partners from ICI and embed Elrond Web3 innovations into the next generation of national and institutional frameworks”.

The post DNS and institutional NFT marketplace on Elrond appeared first on cryptodailynews24.com.