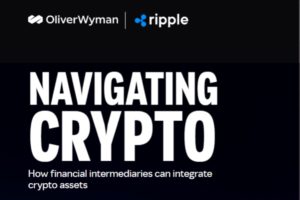 Ripple report: the relationship between traditional finance and crypto

More than a decade after the release of Bitcoin, Ripple’s report seeks to explore the relationship between crypto and traditional financial systems.

Ripple’s report on the connection between cryptocurrencies and traditional finance

The complex interconnections between cryptocurrencies and traditional finance, according to the Ripple report

In the report, the company’s analysts sought to highlight what the relationship between the digital currency system and the traditional finance system has been so far.

One of the conclusions highlighted by the report is the following:

“Over a decade later, crypto asset adoption has soared but these non-traditional financial instruments have not replaced the traditional banking system”.

The research found that there are approximately 65 million Americans who already own or are otherwise interested in cryptocurrencies and would like to transact in digital assets through their traditional bank.

Ripple experts explain in this regard:

“Banks and other traditional intermediaries have shown interest in building capabilities to serve the demonstrated demand for crypto assets today and to position themselves for a future in which digital assets could become more important building blocks of financial market infrastructure. But despite expressing their interest, crypto asset offerings from most banks remain extremely limited in both scope and scale”.

According to the data collected, there are already over 300 million people in the world who own cryptocurrencies. The vast majority are retail customers. These numbers have doubled every year for the past six years. It is enough to think that in 2016 there were only 5 million cryptocurrency holders.

Geographically, this adoption is not evenly distributed globally, but is nevertheless widely spread. The countries with the largest number of users are India, with around 100 million, the United States with over 27 million, followed by Russia, Nigeria and Brazil.

The five largest populations of cryptocurrency owners are spread across five different continents.

As far as the composition of crypto investors is concerned, the vast majority belong to the retail segment. Institutional investors are only now emerging, thanks also to new financial instruments such as Bitcoin ETFs. They have also recently been listed on the Chicago Stock Exchange, the largest market for futures contracts in the world.

The numbers in the DeFi sector

Ripple’s analysis also touches on the world of DeFi. It is still considered quite limited in terms of numbers, with around 150 billion in total value locked (TVL).

The report states that:

“We estimate there is currently $150 billion in total value locked in the top DeFi contracts.11 Despite the attractive rates and the ability to accept crypto assets as collateral, DeFi remains relatively small today. A reason the majority of today’s 300 million crypto owners do not use DeFi may be due to its inconvenience and the complexity of managing self-custodied wallets”.

Finally, Ripple’s report dwells on the sensitive issue of the regulation of these digital assets, something that has been debated for months quite a bit in every country in the world.

The conclusion the report comes to is the following:

“If regulations remain as they are or become more permissive, traditional intermediaries may become the primary gateway to crypto assets, especially for the dominant use case of buying and selling crypto assets. Traditional intermediaries have large, loyal customer bases with segments that may be interested in crypto, and who prefer to access it through the convenience and security of their existing banking relationship”.

The post Ripple report: the relationship between traditional finance and crypto appeared first on cryptodailynews24.com.