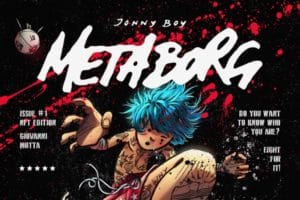 Giovanni Motta is a well-known artist in the digital world. Over the past year, he has made his way into the NFT environment by selling and exhibiting numerous digital works.

The story of Giovanni Motta in the NFT world

The red thread that unites all of Motta’s works is the protagonist Jonny Boy.

The artist pivots each of his works around a cute cartoon-looking child, Jonny Boy.

In reality, the boy is a representation of the child-like self that is inside each one of us but that, with the passage of time, we tend to forget and suppress.

With his works, Jonny therefore seeks to explore, or simply recall, the feelings and emotions that every young boy feels when discovering the world.

In each work, Jonny always has the same expression, which nevertheless encompasses three different moods: fear, which has a negative connotation, wonder, which has a positive exception, and amazement, which is intermediate.

The spectator, depending on his or her own state of mind, can mirror himself or herself in Jonny, feeling understood.

A new dimension for Jonny Boy

In recent months, the artist has dedicated himself to creating a work that is different from his previous ones.

Tomorrow’s drop, on Nifty Gateway, will not simply be a short tokenized video, but a manga, an entire story written and drawn by the artist.

Motta, with this new project, wanted to take a further step, trying to give a new dimension to his Jonny Boy, trying to expand the character’s universe.

In this way, he has managed to bring Jonny Boy to life in the temporal dimension of a story, removing him from the stillness of the images of his paintings on canvas or the short, but wonderful, digital videos.

This project represents the artist’s stubbornness and tireless desire to create. A further personal and professional challenge for him.

Indeed, Giovanni does not want to limit himself to embracing the new digital vision of the art world. Instead, he always wants to push himself a little further, to expand his scope as an artist and, at the same time, not disappoint his following.

A work that tells a compelling story

“Metaborg – fight to survive” will be available tomorrow on Nifty Gateway.

Giovanni Motta conceived, wrote and drew this work that tells the story of a world devastated by a deadly pandemic.

The only survivors are a group of male children and a single girl whose name is unknown.

The children are divided into street gangs and each gang has a warrior leader.

For the protagonists, life is marked by two basic activities: procuring food and training hard to qualify for the most important fights: the Metaborg tournaments.

But that’s not all, because this project, although conceived and signed by Giovanni Motta, also involved other important artists, collectors, personalities and influencers from the Crypto world. Internationally renowned actors from the NFT world lent themselves to become fighters and challenge Jonny Boy.

This results in a kind of phantasmagorical novel in which fictional characters, as well as eminent figures of crypto art, appear transfigured into a band of ruthless warriors and fighters. Each has their own costume, a name or disguise that reveals their true identity.

“Metaborg – Fight to Survive” is a comic book of almost 140 pages, whose plates, all rigorously hand-drawn and then reworked with Photoshop on a graphics tablet, read in a Western manner, from left to right.

It is a dystopian story based on the most classic premise, the end of the world.