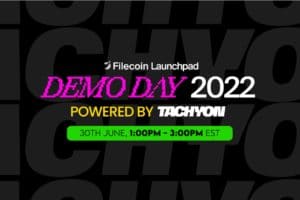 Tachyon’s Demo Day 2022 will take place on 30 June. This is an event dedicated to Web3 during which it will be possible to meet 13 different teams that are working on DeFi, NFT, Gaming, metaverse and Web3 projects.

The event was also promoted on Twitter by Ethereum co-founder Joseph Lubin, who also co-founded ConsenSys.

Looking forward to Tachyon Demo Day on June 30th. This is the highest caliber of web3 projects from across the DeFI, NFTs, gaming and metaverse landscapes. Join to see what they've been up to for the past 12 weeks. https://t.co/PsK3TYqzBb

Lubin evidently believes in the potential of Web3, especially in relation to the evolution of the Ethereum project.

Lubin describes the 13 projects at Demo Day as being of the highest calibre in the world in the Web3 sector.

Moreover, he is not very active on Twitter, so if he chose to get involved in promoting this event, it is because he evidently considers it important. It is enough to think that the tweet with which he promoted it is so far his only tweet published in June, and the previous one dates back to 17 May.

Tachyon is an accelerator for ambitious Web3 projects. Its Demo Day is in fact an opportunity to see what these projects have achieved in the past 12 weeks.

The 13 teams present at the event are building new and native Web3 products in various fields of application.

Demo Day, the event organized by Tachyon, one of the largest Web3 project accelerators in the world

The teams present at the event

Blockchain Gaming wants to become the most comprehensive platform for Web3 gaming guilds.

Ephere Football is creating a metaverse where anyone can play football and earn money.

Hashscan is working on a platform to manage and grow the NFT community.

HighFy is creating a CRM for Web3 Analytics.

NFT Deals is creating a new unreserved auction system for buying and selling NFTs with the aim of getting discounts of up to 90% on the initial price.

Photure is trying to create the quickest and easiest way to create an NFT on mobile devices.

Respct is working on a platform for discovering, onboarding and engaging Web3 players and guilds in the metaverse.

USM Lab is a Web3 infrastructure and technology company in the metaverse.

HyperDapp is a decentralized protocol that allows anyone to create and deploy verifiable front-ends for dApps.

The world of Web3 is evolving rapidly, and the fact that it can somehow be supported by people like Joseph Lubin and companies like ConsenSys means that it can already count on considerable backing in the crypto sector.