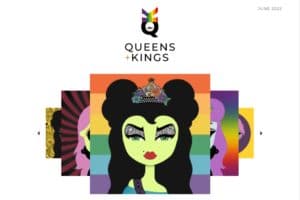 Hackatao and partners have collaborated to launch the Queens+Kings NFT project of 6900 gender-fluid avatars to celebrate Pride month and donate proceeds to OutRight Action International.

Hackatao, together with its partners NFTStudios and Sotheby’s, collaborated with OutRight Action International, an organization that fights for human rights and equality for the LGBTIQ+ community worldwide.

In honour of Pride month, the collaboration led to the launch of Queen+Kings, the NFT project with 6,900 gender-fluid avatars that are composed of interchangeable, randomly assigned and algorithmically generated NFT individual traits.

Inspired by the romantic kitchen tango scene in Wong Kar Wai’s Happy Together, 1997.
A declaration of love and devotion

“A closer look at one of the new Q+K Pride traits. Inspired by the romantic kitchen tango scene in Wong Kar Wai’s Happy Together, 1997. A declaration of love and devotion. #HappyTogether #WKW #PrideWithAPurpose @OutRightIntl Courtesy by Block 2 Distribution ltd”.

Basically, the algorithm’s imposition is subverted by the Hack the Royals function, created for the project, which allows collectors to disassemble and assemble their royals with absolute freedom.

Queens+Kings is an artistic investigation into the concept of gender identity and creative expression, fighting for inclusivity, celebrating and honouring diversity, liberation and queer culture.

Hackatao and the new NFT traits for the Queen+Kings project

This very month, artist duo Hackatao, will release several Pride-inspired NFT traits with varying rarities and distributed randomly, which will be available for purchase on the Queens+Kings platform.

All proceeds from this distribution of NFT tracts will go to OutRight Action International to support their cause. Not only that, for this month of June, Hackatao and partners will also donate a percentage from the secondary market to OutRight.

In fact, on OpenSea, there will also be an auction to benefit OutRight and other LGBTIQ+ charities. In addition, the collection hosted by MetaPride Land, will also be displayed throughout the metaverse with partners such as Decentraland, The Sandbox and Cryptovoxels.

Speaking about this, Katie Hultquist, Director of Leadership Giving at OutRight said:

“OutRight Action International is engaged in the web3/NFT space because there is a tremendous opportunity to radically accelerate social & legal change for LGBTIQ people around the world and ensure that the progress we’ve made is not lost. However, our entire global movement is massively underresourced and we need more allies to join us.

That’s why partnering with a renowned, pioneering artist like Hackatao is so important. We especially appreciate the expansive & creative gender expression in Queens+Kings that reflects the full spectrum of humanity & honors queer culture & identities”.

The Sandbox also celebrates Pride month in the metaverse

A few days ago, The Sandbox‘s blockchain metaverse also announced its collaboration with People of Crypto to launch its first hub dedicated to diversity, equity and inclusivity in the metaverse on 24 June 2022: the Valley of Belonging.

Not only that, People of Crypto together with NYX Cosmetics will launch a collection of 8,430 NFT avatars on The Sandbox, specifically to celebrate Pride month and emphasize that make-up has no gender.

The launch date will be 17 June and is representative of the estimated 84.3% global majority of communities of colour and LGBTQIA+.