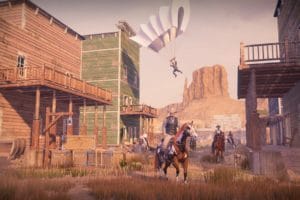 Gala Games reportedly stated that GRIT is only the first of its blockchain games to be released on the Epic Games Store, with a mission to bring Web3 games to the masses.

Epic Games Store, on the other hand, has already published the game’s live page, available to its more than 194 million users.

GRIT will be the first Gala game on the @EpicGames store

“It’s official! GRIT will be the first Gala game on the @EpicGames store”.

Speaking about this, John Osvald, President of Gala Games said:

“Epic is a pioneer and visionary in the video game industry. Gala Games’ titles being available on the Epic Game Store brings legitimacy to this new genre of gaming. Easy access to Web3 games is a turning point for those players who have not yet seen how digital ownership can enrich the gaming experience”.

GRIT, is a game that uses blockchain and NFTs to authenticate unique digital objects and allow players to resell those objects. The game is a battle royale set in the Wild West created by Team Grit.

The new launch on the Epic Games Store is just a first step for Gala Games in pursuing its goal of making blockchain Web3 games mainstream by focusing on high-quality content.

Overall, Gala Games has been successful on the financial front with a small audience on its Townstar and Spider Tanks (beta) games, with more than 1.3 million players, but the goal is to convert millions more players to blockchain games.

Not only that, the Gala Games ecosystem also sees the Gala Games (GALA) token, created on the ERC-20 standard for the Ethereum blockchain, which is also compatible with Binance’s Smart Chain.

Through the token, players can invest in their game assets, such as Spider Tanks, and own them. They can also resell them. Their tokens also give them the right to vote on the future direction of the game’s development.

GALA has a market capitalization of $520 million, far from the peak reached in November ($5.4 billion).

The challenge is to make the process of buying, storing and selling NFT an easy one for traditional players. Gala uses MetaMask wallets and the OpenSea trading platform.

Crypto gaming and the metaverse

While Gala Games launches its blockchain Web3 games, other major gaming companies are collaborating with Epic Games to create the metaverse.

They are SONY and LEGO, the two biggies that have invested in the development and enhancement of Epic Games’ revolutionary development engine: Unreal Engine 5.

The idea is to create a metaverse through SONY’s video game know-how and the long-established ability of the Danish-based company to create parallel worlds and entertain, as well as to stimulate the minds of children everywhere.