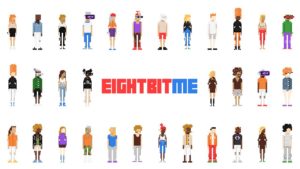 EightBit: 10 Reasons why I am bullish on this NFT collection

The NFT sector, which has been growing steadily since 2018, is evolving to look more and more like traditional cryptocurrencies. Collectors, traders and influencers keep repeating that NFTs are meant to be forever, that NFTs are the revolution of the decade and that NFTs can bring you stratospheric gains, however, if you ask them what to buy they always recommend NFTs that they already hold, looking only at self-interest.

This ‘toxic’ behaviour is deeply inappropriate and drives newcomers away from the industry as they get ripped off by influencers and become their ‘exit liquidity’. In this article we will give you a better understanding of how NFTs are broken down and tell you about one really special collection that we are very bullish on.

What are NFTs and what the EightBit collection is about

NFT Collectibles (PFP) can be divided into 3 categories: “Cash Grab”, “Trends of the Moment” and “Legitimate Projects with a Long-Term Vision”.

These are NFT projects created solely to make fast money and abandon the project. They can usually be identified by very high MINT prices, very high Royalty FEE and low quality designs, almost always created by amateur artists offering super cheap services on platforms such as Fiverr and Freelancer. These are projects to AVOID.

Trends of the Moment

These are small projects that become a momentary trend and their price soars, even doing x10 or x100 in a few days. Unfortunately, most of the teams behind these projects do not expect this much success or do not have the funds to manage such a large project. In a few days the hype fades and the price loses as much as 90-99% of its value. In this case you can try to buy NFTs and sell them on the way up, as the project is likely to be forgotten for a long time.

These are my favourite NFT projects. They are usually projects that start with very low MINT prices, low royalties, few promises from the team and well-prepared founders (if they are not anonymous, even better). These projects are characterized by high-level ART, quality holders and teams capable of doing things right, without having to chase after pumped-up roadmaps and useless promises. In these projects, teams usually avoid commenting on the floor price of their collection and the community focuses more on the project than on the NFT price. Today we will talk about a project that belongs to this category: EIGHTBIT!

EightBit.Me is a collection of 8,888 NFTs generated from countless 8-bit thematic traits.

Why am I super bullish on EightBit

The original project has existed since 2010.

The ‘EightBit’ NFT collection was minted on the Ethereum Blockchain in March 2022, but the original project was launched with great success as early as 2010, i.e. 12 years before the mint. It was a pixelated Avatar Generator that could be used on various social media, including Twitter, which was super popular, used by tens of thousands of people and reviewed by all the world’s most authoritative tech sites such as TechCrunch, Mashable, MakeUseOf, PCWorld, Vice.com and so on.

Among the users we have already seen Kevin Rose (the founder of Moonbirds), Reddit’s Advisors, employees of Google, Snapchat, Instagram and many well-known people on the Web2. The Avatar generator was very popular, as was EightBit NFT. It can be said that EightBit gave birth to pixelated PFPs!

1/ Lots of people think that @eightbit pumped just because of the @kevinrose connection. What a majority of people missed is the history behind it, which is way bigger than that.

What I am about to prove is : …#eightbit

The EightBit Avatar generator was used by some users of the blockchain ‘NameCoin’ (the first FORK of Bitcoin) to ‘unintentionally’ create the first ever NFT PFP collection: The BlockHeads! We are talking about 2014, a year when the meaning of the word ‘NFT’ was still unknown. The collection was created by crypto enthuasiast (not the eightbit team) but credit also goes to EightBit for giving these users the opportunity to create avatars with just a few clicks.

Historical PFPs aren't a trend they're a movement

CryptoPunks and other pixelated PFP projects

The founders of CryptoPunks said they were inspired by some Pixelated Avatar generator to create their ‘CryptoPunks’ collection, the first PFP collection on the Ethereum blockchain. No one knows for sure if they are talking about EightBit or some other generator, but seeing the picture below you can imagine that the two avatars look very similar. We are sure that EightBit has been a source of inspiration for many other pixelated PFPs, but for now these are just rumours.

Comparison between NFT CryptoPunk and EightBit

I swept 90 @eightbit off the floor on Thurs at an avg price of 0.19Ξ purely because I love NFT history. Since then a whale with 170 CryptoPunks swept this morning, @garyvee swept an hour ago, and apparently, @kevinrose was in this promo vid of their avatar creator 10 years ago

Unlike 95% of NFT projects launched in 2022, EightBit started with a mint price of only 0.05 ETH. This is a derisory figure given that competitors at that time were asking from 0.2 ETH upwards for mint. Many people knew about the project years before the 2022 mint, so the interest was there and they would have sold out even with a mint price 3-4 times higher. This was confirmed by the speed with which they sold out: just a few minutes to mint as many as 8888 NFTs.

The founders of EightBit are well-known public figures in the Web3 sphere. The artist is Addison Kowalski, a designer who has worked for big names such as DIGG, Disney, 8Sleep and many others. It is worth mentioning that he worked on DIGG for Kevin Rose, the founder of Moonbirds (another NFT collection, formerly part of Blue Chip) and has remained on very good terms with the latter.

To understand how good Addison is at his job, just take a look at the website he created for EightBit: EightBit.me! In this fantastic portal you can see full-body versions of our EightBits, use EightBit Homes and much more. Full-body PFP!

Blue chip holders are NFT collectors who already have super popular and expensive NFTs in their wallet and have decided to also buy EightBits. So if a person owns Bored Ape, CryptoPunks, World of Women, Moonbirds or other TOP projects and also buys EightBits, this person is considered a Blue Chip Holder. At the moment EightBit has 25-30% blue chip holders who together hold 30% of the supply. When the project went viral, blue chip holders went up to 35%! The project is full of Diamond Hands.

What if I told you that @KevinRose was a part of the FIRST Avatar/Profile Picture Project way back in 2011 and it was NOT CryptoPunks? Yes, that is a young KRose on the right in purple shirt and this is a

on the the original 8-Bit PFP: @EightBit pic.twitter.com/OOGBem6Gng

Many TOP Collectors and VIPs among the Holders

The EightBIT project went viral only 3 weeks after its launch and several well-known people in the NFT scene bought some of these beautiful NFTs. Some of the most famous include Gary Vee (the world’s first NFT influencer), Kevin Rose and Ryan Carson (the founders of Moonbirds), Pransky (the best known NFT trader ever), 888Crypto (one of the world’s top 10 NFT collectors), Poseidon DAO (one of the world’s top 10 NFT collectors); Brenden Mulligan (the founder of Premint.xyz), the COO of RTFKT Studios (NIKE’s NFT Project), Jesse Powell (the founder of the KRAKEN exchange), Leonidas (the world’s best-known NFT archaeologist), EggsDAO (the DAO who discovered the first NFT PFP collection of all time: the BlockHeads), Steve AOKI (no introduction needed), Eva Longoria (who doesn’t love her??) and many more! The total number of holders at the moment is 3250!

i just bought some

The EightBit team continues to work on the project and update the community almost weekly (via Twitter spaces). In only 2 months since the launch we have seen many new features, such as Perks, EightBit Homes, Patches, the collaboration with Turf and many more.

This is a team that has never commented on price, not even when they touched almost 3 ETH for EightBit. This distinguishes teams that are truly interested in their product from teams that are only interested in money. Despite the bear market, the founders are more present than ever and we are sure they will not let us down in the long run! And they also hold more than 215 eightbit, so they really believe in their idea!

Only 3 weeks after its launch, EightBit went viral and in 1 day went from a floor price of 0.20 ETH to almost 3 ETH! A monstrous rise also helped by the arrival of many VIP holders and well known collectors in the industry. Unfortunately the growth was too fast and the price collapsed a few days later, but this event was enough for us to realize the full potential behind EightBit.

If it had nothing to offer, it would never have gone viral! And if it did it once, in a really bad bear market for the entire NFT sector, it can certainly do it again in a better market. And this time the ascent in our opinion will be gradual and steady! A healthier climb!

The art is beautiful!

Recently, NFT PFPs are getting uglier and uglier: monkeys, dogs, cats, goblins, elves and so on. I prefer PFPs that resemble human beings and EightBit is one of them. Their 8888 NFTs are really well made and great to use as avatars on Twitter, Instagram and all social media. In a world that is becoming increasingly digitized and ready for the Metaverse, I want to have my avatar look like me in real life, not some animal or other passing fad.

Imagine what will happen when NFTs are used by hundreds of millions of people and avatars that resemble real people will only be a few 10k PFP collections like EightBit, CryptoPunks, Regulars etc. In my opinion the climb will be crazy!

There are 100 other reasons to be Bullish on EightBit in the long run, but for now I think this short introduction will help you make the right choice and understand if an EightBit is what you need for your NFT collection. I also recommend that you don’t look at the price on a daily basis, but hold on to your EightBit for years! I am sure the team will surprise us!

Greetings to all from Alex!

The post EightBit: 10 Reasons why I am bullish on this NFT collection appeared first on cryptodailynews24.com.