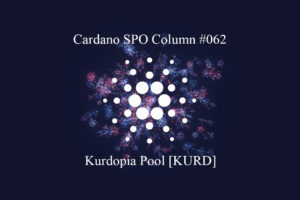 This week’s guest on the Cardano SPO Column is a stake pool that wants to use the margin fee to invest in the Kurdish community: Kurdopia Pool [KURD].

Last week’s guest was a stake pool operated by the creator of ADApools.org, an explorer for stake pools.

Cardano SPO [KURD] is very active in the Kurdish community

Greetings! My name is Nazım and I’m originally from north Kurdistan (south east Turkey). I’m currently based in France, where me & my family arrived about 17 years ago as refugees. My professional background is civil engineering, more specifically structural engineering.

Why Cardano and what prompted you to become a Stake Pool Operator (SPO)?

In late 2016 after I had finished my master’s degree, I had vague thoughts about creating some sort of social media app with a built-in P2P virtual currency for automated micro donations & crowdfunding. I thought I had come up with something nobody had created yet. So I spoke to one of my brothers about it and he told me that something like that already exists…

It’s called Bitcoin and other cryptocurrencies. I remember being disappointed that I hadn’t been aware of it sooner. So I looked into it and discovered blockchain technology & cryptocurrencies were more complicated & sophisticated than I had imagined myself.

I made my first investments in Bitcoin & Ethereum in mid-2017. I quickly understood their shortcomings and I imagined there must be something more advanced out there. That’s when I stumbled upon Charles Hoskinson’s whiteboard video explaining the three different generations and then I also watched his TED Talk, which really resonated with me.

I understood his vision & the potential of what he was trying to create, backed by actual scientific research & peer-review. I think science & research is the best & only path we can take if we want to exploit the full potential of the blockchain technology & create a serious decentralized cryptocurrency that can scale to billions of users & eventually replace legacy systems.

I followed the project closely ever since. I set up a Kurdish stake pool as soon as I could, not only to play a part in the protocol’s decentralization but also to be able to participate in its adoption among the Kurdish community.

Can you describe how the general Kurdish community perceives cryptocurrencies? How can Cardano be useful to them?

I believe Kurds should see the potential of decentralized borderless censorship resistant currencies more than most other populations in the world. Simply because Kurds are split between 4 borders and don’t have their own central banks or currency. Kurds would face censorship & be suppressed if they ever tried to issue their own currency. It’s impossible or near impossible to send a bank transaction into Rojava (north Syria), but a cryptocurrency can reach anyone with an internet connection within seconds.

During the invasion of Afrin by Turkey in 2018, Kurds lost their homes and lands. Recording their properties & land title in an immutable ledger would have been beneficial for them to reclaim what they have lost.

In the past, the Syrian regime had refused to give national IDs & passports to hundreds of thousands of Kurds. So digital identity solutions (Atala Prism on Cardano for example) would also benefit the Kurds & make administrative work a lot easier.

All this progress could be made possible by blockchain technology, cryptocurrencies & NFTs.

Yet, from my experience most Kurds remain sceptical and distrustful, probably due to the lack of knowledge. They rather listen to Twitter memes calling crypto and NFTs scams…

The Cardano ecosystem is seeing hundreds of projects emerge. Which ones stand out in your eyes? What excites you the most?

A project that stands out for me, for example, is World Mobile which seeks to connect the unconnected starting off in Africa using the Cardano network.

I would also like to mention the Veritree project, which planted over 1 million trees (each ADA donation corresponded to 1 tree) and are using NFTs to issue donation records & track the progress of the trees.

Earth Natives is another NFT project that I admire, because they used their artwork to fund the construction of an eco-friendly house (using sustainable materials) for a family in need in Brazil. So to any Kurds reading this, I was able to help fund a humanitarian project in Brazil from France without going through a bank…

Awesome. Any final thoughts? Where can people contact you?

My final thoughts are that people (especially Kurds) shouldn’t be too quick to dismiss cryptocurrencies & blockchain technologies (especially Cardano). I always advise people to understand the actual potential of these technologies & networks, instead of trying to make a quick buck. No matter the market conditions, Cardano is developing & making progress at a steady pace. The technology didn’t fail or isn’t flawed because the price of the token crashed temporarily.

Disclaimer: The opinions and views of the SPOs are their own and do not necessarily reflect those of the Cardano Foundation or IOG.