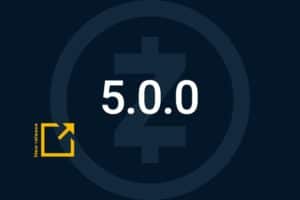 Zcash has implemented “the largest network upgrade in Zcash history”

On 31 May, the long-awaited update of the Zcash blockchain will go online, described by the Electric Coin Company team as “the largest network upgrade in Zcash history”.

This will take place precisely at block number 1,687,104 and is basically version 5.0.0. The developers of the second largest blockchain in terms of market capitalization of their own cryptocurrency, ZEC, are therefore inviting developers to use the software to test it before it goes live on the mainnet, although at the same time it is explained that the upgrade has already undergone “extensive review at both the specification and implementation levels”.

Zooko, the creator of the Zcash blockchain, tweeted about this upgrade, explaining that it is a historic step for humanity as a whole:

It’s here!!! Zcashd 5.0.0! If the Zcash users choose to run zcashd 5.0.0, then at the end of this month Zcash Network Upgrade 5 will activate on mainnet. This is an historic step forward for human society.https://t.co/X5LT1H4rXq

What the Zcash upgrade entails

To get even more technical, this 5.0.0 update, also referred to as NU5, will allow the Orchard protocol for secure payments and the Halo system to be integrated into the blockchain.

As explained in a blog post published a few months ago by the Zcash team itself.

“This would serve as a catalyst for Zcash user confidence and scalability, while making the protocol more attractive, faster and less expensive for others to build on, accelerating Zcash’s use and growth”.

This will also enable the use of Zcash on phones and also the ability to interoperate with other blockchains.

Continuing reading the blog post, it is then explained that Halo is a proof of zero-knowledge, i.e. a consensus method in which the sender can prove to the recipient that a certain statement (in this case a transaction) is true without giving him additional proof.

The latest news on Zcash

In the last few hours, following this important announcement, ZEC has risen by 30%, although it has fallen by almost 20% over the last week like the entire crypto market.

Recently, Zcash had also attracted attention for the revelation that the famous computer scientist Edward Snowden had played a key role in the creation of this technology.

In fact, Snowden allegedly set up the trusted infrastructure of Zcash in 2016, having been attracted to the project because several trusted academic cryptographers were already working on it.

The post Zcash has implemented “the largest network upgrade in Zcash history” appeared first on cryptodailynews24.com.