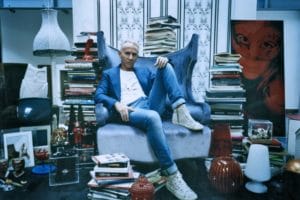 The famous architect Fabio Rotella enters the world of NFTs

Fabio Rotella, an all-round artist, could not resist venturing into the fascinating world of NFTs.

And so, a few months ago, the first blockchain-based project by Studio Rotella began to take shape.

The protagonist of this collection is a cute bunny named Konny. The first NFT was sold just a few days ago on Foundation to the Poseidon NFT Fund for 1 ETH.

The architect decided to dedicate his first non-fungible token to the Ukrainian people who are currently facing the pain and heartbreak that only a war can bring.

Not only was the design, colours and animation inspired by the people of Slavic origin, but also the proceeds from the sale will be donated to an association that is helping in this emergency situation.

Fabio Rotella’s Konny NFT dedicated to the war in Ukraine

Who is Fabio Rotella?

Fabio Rotella, a famous Italian architect of Calabrian origin, was born in 1963 into a family of creative people.

His grandmother already owned an atelier in the 1920s, his uncle Mimmo Rotella was one of the most important interpreters of Pop Art in the world and his father is remembered as an exceptional architect.

Fabio was thus born and raised in a family of artists and began cultivating his creative vein at a very young age.

After graduating in architecture in Rome, he went on to obtain a Master’s degree in Industrial and Management Design at the Domus Academy in 1989. He then met Alessandro Medini, a leading Italian architect and artist, with whom he collaborated from 1990 to 1995.

In 1996 Fabio decided to found his own studio, or rather, his Factory.

That year saw the birth of Studio Rotella, a meeting and working space for creative minds from all over the world.

Studio Rotella deals with architecture, design and image consultancy for major companies. It is an international design studio, with offices in Milan and Beijing, China.

The Studio’s work includes architectural and conceptual projects in Italy and abroad, ranging from the redevelopment of urban areas to industrial reconversions.

In 2011, Architect Rotella was commissioned by the Italian Ministry of Cultural Heritage and Activities to design the first permanent Italian Museum abroad – “Spazio Italia”.

The project took shape inside the National Museum of China in Tiananmen Square in Beijing.

In 2013, the studio then inaugurated “Italian Living Experience”, a project area dedicated to the creativity of Italian excellence, in the 751 district in Beijing.

Fabio Rotella is a highly successful architect. Over the years, he has also shown himself to be extremely attentive to the environment and the fate of future generations.

In fact, Fabio has always preferred to approach each new work and artistic challenge with respect for mankind and the preservation of our planet.

In an old interview, the architect had this to say:

“Our goal, when we think of a project, is to create something that will improve the lives of those who will use our product, whether it is architecture or an object. We creatives have a responsibility for future generations. What we create is tomorrow’s world. Respecting people and our planet is part of our mission”.

The first NFT created by Fabio Rotella’s prominent studio, as mentioned, was purchased on Foundation by the well-known Poseidon NFT fund.

The Italian architect decided to donate the entire proceeds from the sale to an association that helps Ukrainian people in need.

More precisely, the chosen organization is the “I bambini dell’est” charity.

This association has been taking in children from Chernobyl for years but, given the current emergency situation, it has also decided to organize a fundraiser to support the Ukrainian people.

The association is in contact with other organizations working on the Ukrainian borders that can provide immediate shelter for the refugees.

The post The famous architect Fabio Rotella enters the world of NFTs appeared first on cryptodailynews24.com.