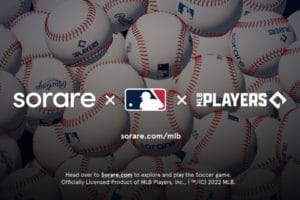 Sorare is expanding into baseball NFTs with Major League Baseball

Sorare is reportedly partnering with Major League Baseball and MLB Players, Inc. to launch the new free-to-play NFT-based game that will be live this summer.

Basically, fans will be able to access the Non-Fungible Token-based platform to celebrate, share and own their passion for MLB through the game, just like it already happens with football.

In this regard, Nicolas Julia, co-founder and CEO of Sorare said:

“The connection between Americans and baseball is enduring. And baseball has always been on the cutting edge of new technologies and innovations, so we’re proud that MLB and the MLBPA have chosen Sorare to deliver an NFT MLB Game to fans globally. MLB has been at the forefront of interactive games for decades, while baseball has some of the oldest and most established forms of sports memorabilia. Together they show how much fans want to own and be a part of the game.

Today, as digital engagement and technology evolves for a new generation, our partnership will help a new and broader fanbase to connect with America’s pastime”.

So not just fantasy football, through this partnership Sorare will offer a new game in which fans can create the best NFT team representing Major League players, connecting with athletes, clubs and the league during the live experience of baseball games.

“Sorare has built a new baseball gaming experience that will excite fans around collecting Players’ NFTs, building winning lineups and competing against baseball fans all over the world. We are very excited about our partnership and the effect Sorare’s first foray into North American sports will have on the growth of our game globally”.

Sorare already boasts of a community of 1.8 million registered users in 185 countries around the world, to whom only football has been offered as NFT game.

Moreover, in the past 12 months, the company has experienced an explosive 32% month-over-month growth in active users and plans to further grow its young, digital-native audience in the United States with MLB.

In early March, Sorare also published the ranking of the most expensive NFTs in the Italian Serie A, which saw Napoli striker Victor Osimhen, whose 2.0 figurine reached a value of 30,000 euros, in first place.

He was followed by Roma midfielder Nicolò Zaniolo at 22,000 euros and, in third place, Inter defender Alessandro Bastoni with 18,872 euros.

In contrast, the ranking of the most liked players, based on the number of followers on the platform, saw Lautaro Martínez with 17,000 followers, followed by AC Milan goalkeeper Mike Maignan with 8,938 followers and Zlatan Ibrahimović with 7,245 followers.

The post Sorare is expanding into baseball NFTs with Major League Baseball appeared first on cryptodailynews24.com.