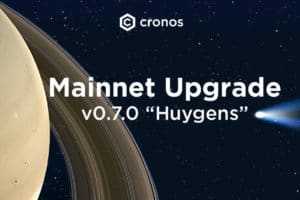 Upgrades to the Cronos Chain network

Cronos Chain has announced that there will be network updates at block 2693800 around 10 May 2022. To ensure the safety of funds, CRO, CRC20 and ERC20 tokens will be suspended from the Crypto.com app and exchange.

The new update of the Crypto.com blockchain, Cronos Chain, is coming

Cronos Chain’s new Mainnet Upgrade – v0.7.0 will take place at the height of block 2693800, scheduled for 10 May 2022, and contains a number of upgrades that primarily aim for greater network scalability and improvements to the fee system.

Specifically, Cronos Chain aims to improve node storage performance by increasing block size by 2x a few weeks after the update. Not only that, the developers also aim to improve Cronoscan in terms of accuracy, so that they and their partners can index and monitor what is happening on the network.

Another peculiarity is the cost per transaction, which will be adjusted gradually, based on the capacity of the network at that particular time.

The temporary suspension of CRO, CRC20 and ERC20 tokens

A few hours ago, in an effort to ensure the safety of funds, Crypto.com also announced that during the Cronos Chain Upgrade, the use of CRO, CRC20 and ERC20 tokens will be suspended from both the App and the Exchange.

https://t.co/vCNztATkNg is supporting @cronos_chain’s Mainnet Upgrade – v0.7.0
$CRO, CRC20 and ERC20 tokens on Cronos deposits/withdrawals will be temporarily suspended in the App and Exchange around 10 May 2022.

Trading of $CRO, CRC20 and ERC20 tokens will not be affected. pic.twitter.com/Uv37myAxon

This is a temporary suspension of transfers that will occur slightly before block 2693800. This will serve to ensure security without tokens being affected by the upgrade.

Only when the situation is stable, Crypto.com said it will resume deposits and withdrawals, alerting users that they can monitor the status directly in a dedicated section.

A few days ago, Crypto.com announced that it has updated the rewards plan of its Visa Cards, which have been active since 2018, to take effect from June 2022.

This involves a revision of the CRO cashback rates for the different cards, as well as the introduction of a monthly rewards cap for some CRO cards and the revision of staking rewards.

These revisions are generally all to the downside compared to the earnings that users have become accustomed to receiving.

Obviously, the market reaction has not been so happy, so much so that in just 24 hours since Crypto.com’s announcement, CRO is down 20%. Something that doesn’t seem to be stopping, as at the time of writing, CRO has fallen to 21st position by market capitalization, at a price of $0.28.

The post Upgrades to the Cronos Chain network appeared first on cryptodailynews24.com.