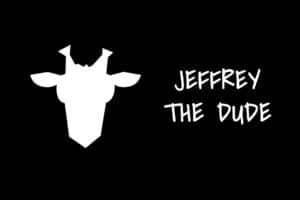 NFTs: Who is Jeffrey The Dude?

The Jeffrey The Dude NFT collection

Jeffrey The Dude is actually a giraffe. Or more accurately, it is a decentralized brand symbolized by the image of a giraffe, whose ownership is represented by 5,432 Jeffrey NFTs on the Ethereum blockchain.

Thus, anyone who owns a Jeffrey NFT is also, de facto, the owner of a part of the brand.

In this way, by being a co-owner of the brand one earns from the brand’s revenues, playing an active role in its growth.

In fact, owners will be able to vote on the investment and collaboration proposals that will be presented, on ideas and changes. In addition, users will be able to interact with other members of the community and will be an integral part of the project itself.

Each Jeffrey NFT is unique, thanks to more than 100 different traits with different levels of rarity.

The DNA of each Jeffrey is generated and stored in a non-fungible ERC-721 token on the Ethereum network, and its metadata, including the image, is stored on IPFS and made immutable forever.

In this way, no two NFTs are the same, and each NFT owned is unique.

All NFTs will be released in three different phases, while they last, and a whitelist has been set up so that Jeffrey NFTs can be acquired in presale.

The DAO of Jeffrey The Dude

The project is based on a DAO. In fact “Jeffrey The Dude” is a decentralized organization, governed effectively by the owners of its NFTs.

However, among the 5,432 Jeffrey NFT owners there is a smaller group of members who will have greater responsibility, and power, to guide the brand in its future development.

These will be the owners of the first 56 NFTs, known as the Governance Jeffrey NFTs.

This group will discuss ideas and proposals coming from the community, deal with initiatives, partnerships, sponsorships, and organize the work following decisions on which the entire community will vote.

When the smart contract is distributed on the blockchain, the Governance Jeffrey NFTs will be held by the Core Team. After the collection is sold out, 28 of these 56 Governance NFTs will be auctioned off.

In the second quarter of 2022, or at the latest in the third quarter, the first vote of the DAO will occur, initiating investment activities.

The release phase for subsequent NFTs began on 7 May.

In addition, several NFTs will be given away to community members who stand out for their participation and support in the implementation of the project.

The mission of the project

The project’s mission is to create a community that is “inspired by the desire to make a social and business revolution”. The goal is to create a global brand in which people can recognize values such as inclusivity, fairness, respect and social responsibility.

Fashion, technology, arts and culture and entertainment are the areas in which we would like to direct the future of Jeffrey The Dude.

The “Jeffrey The Dude” brand itself will be owned by the holders of the 5,432 Jeffrey NFTs that will be issued on the Ethereum blockchain.

The post NFTs: Who is Jeffrey The Dude? appeared first on cryptodailynews24.com.