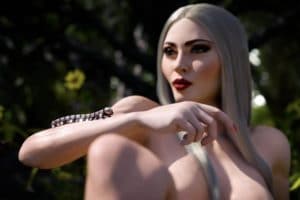 Madonna and Beeple have announced that their new collection of 3 NFTs titled “Mother of Creation” will go on sale on 11 May 2022 on SuperRare. Proceeds from the sale will be donated to charity.

Madonna and Beeple have announced the launch of their new 3 NFT collection titled Mother of Creation, which will go on sale exclusively on SuperRare on 11 May 2022.

INSANELY HONORED to have collaborated with @Madonna on this project. Excited for the world to see this one…

“Since the beginning of time……..

🫃 Leaning into a new virtual world with @beeple. Check back here on Wednesday May 11 at 3pm PST / 6pm EST for the nativity. NFTs dropping on @superrare. All proceeds to benefit these organizations: @NationalBailOut @vday @voices_org_ua”.

“INSANELY HONORED to have collaborated with @Madonna on this project. Excited for the world to see this one…”.

The starting price for the 3 masterpieces by the two artists will be 0.00035774 ETH ($1 USD), while proceeds from the sales will be donated to three non-profit organizations – The Voices of Children Foundation, The City of Joy Foundation and Black Mama’s Bail Out.

Apparently, even star Madonna couldn’t resist the allure of NFTs to convey her message, adding to her already artistic communication tools such as music, film, dance and writing.

The new collection is the result of a year-long labor of love, with the goal of telling the idea of creation and motherhood through the new digital art tool of Non-Fungible Tokens. The three works explore the concept of birth through darkness and light in our modern world.

In this regard, Madonna stated:

“When Mike and I decided to collaborate on this project a year ago, I was excited to have the opportunity to share my vision of the world as a mother and an artist with Mike’s own unique point of view. It’s been an amazing journey building this together from an intellectual idea to an emotional story, giving birth to art.

I wanted to investigate the concept of creation, not only the way a child enters the world through a woman’s vagina, but also the way an artist gives birth to creativity. Most importantly we wanted to use this opportunity to benefit mothers and children who are most in need right now”.

Beeple also joined in the commentary as follows:

“I was thrilled to connect artistically with Madonna to create this series of artworks. Our collaboration was really natural and we shared a creative vision that has been so gratifying to realize and now share with the world”.

Specifically, the three NFT works are:

Singers and artists in the world of Non-Fungible Tokens

This new pair of famous names such as Madonna and Beeple, are on the same level as other names of artists and singers who use NFTs to express their art.

Just last month, Italian artist Matteo Mauro recorded his new $100,000 sales record for his Four Elements NFT collection, of which Terra (Earth) had yet to go on sale.

Celebrated hip hop singer Snoop Dogg also launched his first NFT collection using the Cardano blockchain in early April, thus expanding beyond Ethereum. The new project was made possible thanks to the collaboration of Clay Mates, the liaison between Snoop Dogg and the Cardano Community.